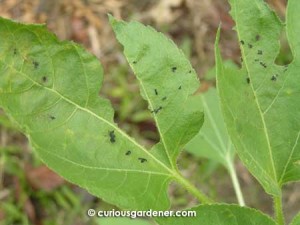 Sunflower leaves under attack by ...?

Something has been feasting on my growing sunflower plants, and I am not happy about it.

I had a lot of trouble initially, trying to get the seeds to sprout. When I overcame that, I had to contend with pests and my own negligence in letting the seedlings get too leggy. However, we got through that, too, but then something began attacking the leaves of the almost-adult plants, leaving some black residue behind. I searched for caterpillars, thinking the black stuff could be their droppings, but there were none to be found. On the off-chance that it could be beetles, I broke my “be organic” rule and sprayed a tiny bit of insecticide, hoping that the scent of it would deter them. It seemed to work, and I was happy … for a while.

Now, just as some of the plants are showing signs of beginning to bloom, something has started attacking the plants again. Whatever it is has been eating the leaves voraciously, leaving just the leaf stalk attached to the stem. It has stripped two plants of leaves already, and I’m being my usual curious self, waiting to see if they will be able to sprout new leaves and keep growing. 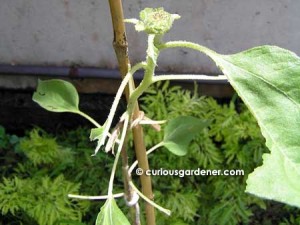 To add insult to injury, I also found another little horde of young hairy caterpillars on some of the leaves of one of the attacked plants. The ‘pillars had to go. Besides, they’ve just stripped my loofah vine of a lot of leaves again.

Since that lot was out of my reach, I’m sure they’ve all metamorphed into a new generation that will come back to irk me.

In the meantime, though, I’m also keeping an eye – no, both eyes – open to try to figure out what the culprits attacking my sunflower plants are. At least one red grasshopper has been spotted in the vicinity. It seems quite alert to humans in the area, because every time I get near it, even though I don’t see it, it flies off, catching my attention in the process. Is that a sign of a guilty conscience, I wonder?

Could the culprit also be snails or slugs? Because I’ve noticed a gooey substance on the stems – but that could be plant sap. Nevertheless, I’m going to put out some snail pellets, just in case.

Or could they be the beetles that fly out at dusk? I have no idea!

It’s really frustrating that this is happening just as the plants are reaching maturity – can you see the flower forming at the apex of the stem in the second photo? There are a few more sunflower plants that are still untouched, and a little more matured. Barring any more disasters like the very heavy rain that broke the stem of one plant, I’m hoping to be able to post some nice pictures of sunflowers blooming in the near future. Wish me luck!