I’ve been trying to grow sunflowers for the last few months but have had the worst luck. Kids are supposed to be able to grow them, aren’t they? But the Sunflower god seems to be frowning down on me for some reason, even though I’ve been quite persistent in my quest to start growing the plants. 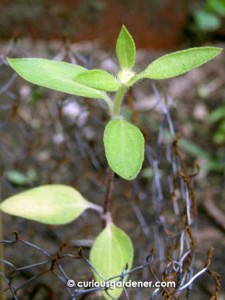 My "biggest" sunflower plant a few days before it departed for the big greenhouse in the sky...

The first time I tried growing them from seeds, I used earth in paper pots. It seemed fairly successful – only one out of three seeds didn’t germinate. However, one seedling eventually died, and the other grew to the “great big” height of about 15cm before it, too, died. Its demise could have been because of the persistent rainy weather we’ve been having lately – sunflowers don’t like wet conditions.

The next time I tried growing them was direct into a flowerpot, using fresh seeds I had been given. Nothing grew. Was I not keeping them damp enough? Or putting the seeds the wrong way round? Would it really make a difference? Grr! So my next attempt was direct to the soil in the garden, using purchased seeds, laid horizontally, just in case. Two seedlings grew, but withered away after a couple of weeks. It could have been the rain that interfered again. I don’t know.

By this time, though, I was pretty frustrated. I was determined to succeed at getting the seeds to germinate! That was my first goal. The next would be to get them to seedling stage, and then to be planted out and grown to maturity. Just take things step by step… 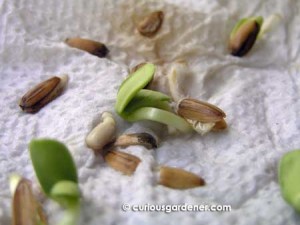 Germinating sunflower seeds just removed from their ziplock environment. Notice how they're all at different growth stages?

So for my next attempt, I decided to take a different tack. I laid some fresh sunflower seeds on a paper napkin that I folded over the seeds. Next, I dampened it with a mild seaweed solution (without making it soggy), and sealed it in a ziplock bag. Deciding to be casual about it, I left the bag to one side and forgot about it for three days.

Wonder of wonders, some of the seeds had sprouted! The little air I had left in the bag, for fear of fungus or mould forming, had been used up and the ziplock bag looked like it had been vacuum sealed. The wet napkin looked a bit drier and droplets of water condensation had formed on the insides of the bag. When I opened it, I found the paper napkin to still be damp. Several seeds had sprouted, and I saw them at different stages of germination – some had the root just poking out from the seed while others had grown tap roots – the longest, up to 3cm – and looked very much like a bunch of little bean sprouts. I had to extricate the longer roots from the wet tissue before transplanting them to small paper pots where I hope they’ll grow to a decent size so I can plant them out. Baby steps, remember?

So what did I learn from this exercise?

I also know that the seed casing needs to be softened enough for germination to take place. Otherwise, the seeds remain too hard and that’s the end of that story.

I also know that sunflower plants do not like too much rain! So perhaps I’ll try to grow my seedlings in pots until we learn from our local meteorologists that this freaky rainy weather we’ve been experiencing is going to end. Not that I’m complaining about the rain – in its absence, we’d normally have heat and haze at this time of year – not my favourite combination! So I may have to go invest in some bigger flower pots, and maybe this time we’ll finally have some nice cheery sunflowers blooming across the garden in a few months. Heck, if people can grow Mammoth sunflower plants in flower pots, I can grow regular sunflowers in pots!

You may want to read: Growing sunflowers from seeds – in retrospect