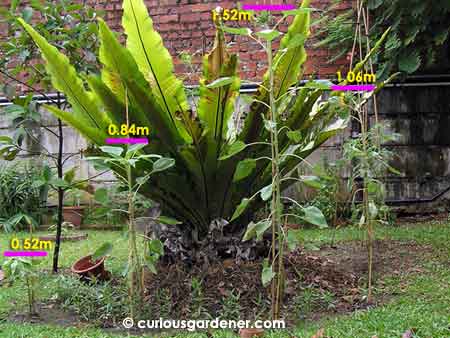 All four plants were grown at the same time, yet are so different right now! And yes, they're all set to bloom, including the tiny one.

Finally, after months of trying to germinate seeds, and then to keep the young plants alive and growing, we have sunflowers beginning to bloom in our garden!

The funny and interesting thing about the plants is that they’re of such different heights and strengths, even though they’re from the same batch of seeds. The tallest one seems to have peaked at 1.52 metres while the shortest one is a mutant – it looks like a miniature sunflower, at 50cm high! Just look at the four of them in the picture – they couldn’t be more different from each other!

The flowers are also smaller than I expected, at about 10cm across. I suppose if I want big flowers, I’ll have to grow the Russian Mammoth sunflowers. These, however, are the normal sunflowers with supposedly edible seeds.

I’ve been following the growth process quite avidly. Here’s the journey… 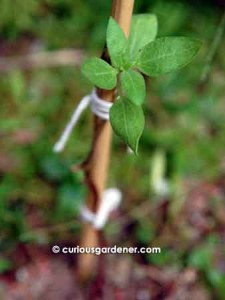 Young plants with leggy stems can be salvaged - plant them deeper and give them a support to grow against. Remember to loosen the ties as the plant grows, or else the ties will cut into the stem as it thickens. 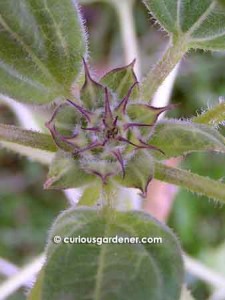 The flower bud starting to form at the apex of the stem - see the dark edges appearing. It is still pointing skyward at this time. 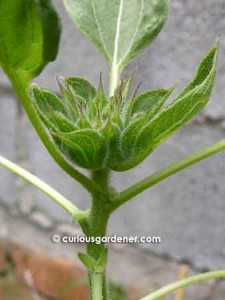 The sunflower bud still developing... It looks like a lotus flower at this point, but it's not! 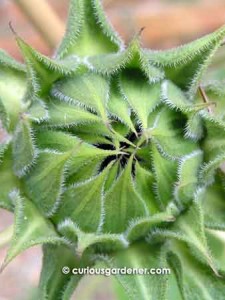 Finally, the head is bigger and rounder, and there's a glimpse of black within. It's about to open, and the head is tilting forward. 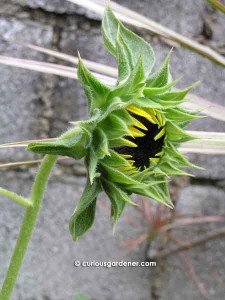 The head leans forward now and the petals begin to unfold. This phase somehow reminds me of the Little Shop of Horrors - "feed me, Seymour, feed me!" 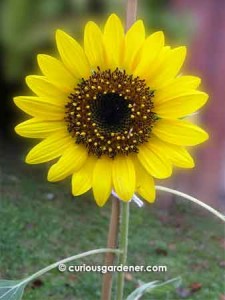 Fully opened sunflower. It's a beaut, isn't it?

Now, I read somewhere that the head of sunflower plants follow the direction of the sun from east to west before the flower blooms, and I did observe that. I also read that when they bloom, they face west. So, when I decided to plant sunflowers around our big bird’s nest fern, I positioned them so that they would be in an arc where we could appreciate the pretty flowers facing west.

Well, guess what? My flowers are facing east, and somehow I don’t think the fern appreciates their beauty as much as we would, if we had an unobstructed view of the flowers…

I’m quite pleased to note that there are several other buds forming along the stems of the sunflower plants, so even though the first flower at the apex has finished blooming, there should be a few more to enjoy in the weeks to come. Will I plant more? Yes!