When I decided to grow ginger, I broke each rhizome that I had into smaller pieces that had one growing bud per piece. That meant that some of the bits were quite small – only 1.5 to 3cm in length. I wondered if that would affect their growth and survival rate, but hadn’t taken note of where I had planted which size of ginger bit. So, while some sprouted and grew more readily than others, I wasn’t sure if they were from the bigger or smaller pieces of ginger – and I wasn’t going to spoil their growth rate by digging them up.

Then, almost two months after I’d started the ginger plants, we decided to experiment with an old rhizome of turmeric.

And when I say old, I mean it was already a bit decrepit – a little dehydrated with dried, spindly roots poking out. To be honest, I thought it was going to contribute to the composting effort. However, to my great surprise, it actually sprouted after a very long 2 months.

Not only did the turmeric sprout, it also grew more enthusiastically than the ginger did. This prompted me to look back through my photos to try to compare how fast they each grew in the same frame of time. 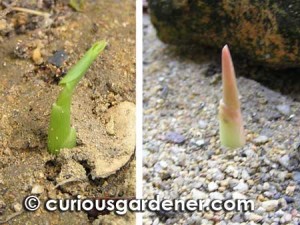 Day-old sprouts - ginger on the left, turmeric on the right

Above, you see each of the sprouts a day after they emerged. 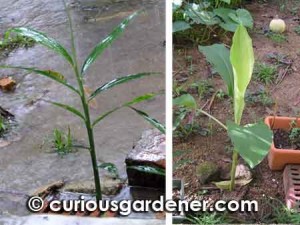 At 6 weeks old - ginger on left, turmeric on right

Above, the plants are at 6 weeks old. The turmeric was about 10cm higher at the same age. You can’t really tell from the photo because the scale is different (sorry, I framed the pictures differently when I took each one; had no idea I’d be doing this comparison :().

So, does the rapid rate of growth of the turmeric mean that using a bigger rhizome will give a faster rate of growth? Was this even a fair competition? What these two plants have in common is that they’re both grown from rhizomes. However, the ginger has almost three times as many leaves as the turmeric – but those leaves are smaller than the turmeric’s. I don’t know. I’ll have to start a new ginger plant from a bigger rhizome and see what happens. It was fun to just speculate, anyway.