I’ve been a bit preoccupied by seeds lately – those that I’ve set to germinate. Ever since the first Zinnia poked it’s little green seed leaves at me, I’ve been making excuses to go visit the nursery to see if there were more new arrivals … several times a day!

Thanks to that, I noticed a few other Zinnias beginning to uncurl their necks, so to speak, before straightening the following day to open their seed leaves. I feel such joy watching that happen. 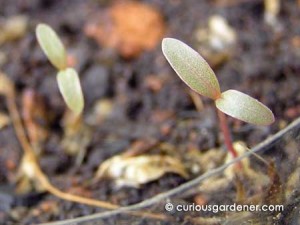 Then, finally, the Bachelor’s Buttons decided to get in on the act. I was peering in at the germination pot when I caught sight of a tiny speck of colour – a little purple stem was beginning to uncurl! By the end of the day, a pair of faded purple seed leaves had opened, and I was silently cheering them on. Another seedling joined the first a few days later, and I’m hoping for more. There should be several more viable seeds in the seed head I planted!

The Dahlberg Daisies piped up as well. The tiniest, littlest stem began to poke it’s way upwards late one morning – and I mean minuscule! The only reason I noticed it was because the bright green of the stem was in such contrast with the dark potting media. By late afternoon, the tiny seed leaves opened. DG told me that there are lots of seeds in each seed head – and I had several of those. I’d really love to have a bunch of these plants because they’re so pretty when planted in a cluster, so I hope a lot of them sprout! 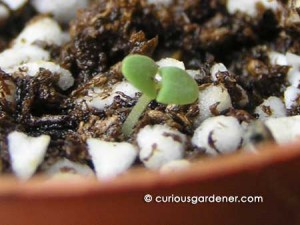 Last, and certainly not least, a couple of lemon basil seedlings decided to pop up and say hi to me …but then one of them died the following day. Fortunately, a replacement came up a few days later. I really hope more seeds sprout, because I absolutely love the scent of the plant – just handling the seeds to plant them had left a pleasant, lingering lemon fragrance on my fingers, and I can imagine having that smell around the garden…

So now I’m just waiting on the sunflower seeds. And I was having so much fun that I went and got some coriander seeds to plant. Still waiting for those to grow, too.

That leaves the score at Zinnia: 6, Dahlberg Daisies, lemon basil and Bachelor’s Buttons tied at 2, and sunflowers and coriander at nil. Come on you seeds!!