When it came to the decision of what veggie to start planting, my first thought was beans. We had experimented with them as children and it was a nice thought to go back to carefree days through this activity.

So on my next visit to a nursery, I checked out what seeds they had and ended up with snap beans. According to the description on the packaging, these are especially suited to hot weather and humid conditions. Just perfect for Singapore, right?

The seeds were dark purple, just over about 1cm in length. There were 13 of them in the foil packet, and I wondered if all of them would grow to maturity and supply us with lots of beans.

I sowed the seeds in a planter to give them a chance to germinate undisturbed. Snails can do a lot of damage, given the chance — and I wanted to make sure I eventually have something to harvest. Lo and behold, 5 days after sowing the seeds — and exactly as they said on the packaging — the first seed broke through the earth, like some sort of creature pushing its way out of the dark and into the light. 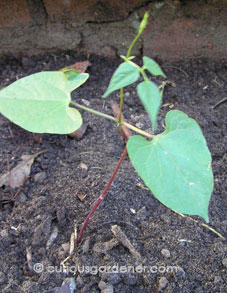 It really did seem like they were outworldly creatures as bumps began to appear on the previously-flat surface of the earth in the planter. Each time I went to peek, there would be another bump appearing, and once it broke through the earth, you could see the unwieldy head of the bean pushing its way up, curled under the stem. Once the whole bean was out, it would shed the seed casing and start tilting it’s head upwards. Then the seed leaves would start to emerge.

Boy, I think Mrs Thomas, my old Bio teacher will be impressed I remembered that much!

Out of the 13 seeds that were planted, only one didn’t make it. After a couple of days, I transferred the seedlings to a bed I had prepared. To make sure they liked it there, I had loosened the earth and mixed in some compost a few days before.

I wasn’t sure if these bean plants would be climbers or bushes. It wasn’t indicated on the packaging and research on the Net said string beans could be either one. And so I waited and watched.

After a couple of days, it became apparent that they were climbers, so I had to make a short trellis for them to call home.

The 4-foot bamboo sticks were bought from a nursery. I decided to use a “tepee” design, with the base of the sticks stuck in the ground and meeting at the top. I used bag ties to secure the tops and the horizontal sticks.

It has been pretty entertaining watching where the tendrils would creep to. The top 4-5 inches of the stem are green, and have a sticky, prickly texture to them. As the stem grows longer, it changes colour to red/green, and that feels nice and smooth, like a regular stem should.

At first, I helped direct the plants to the poles so they could start growing upwards. Those that did wound themselves around the supports in an intriguing, windy manner. A couple of the plants had the misfortune to be trampled over by our dogs. 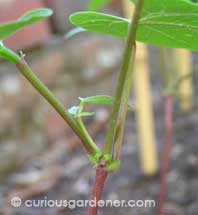 I love to watch how plants keep growing... Even new leaves thrill me!

Take note not to plant things in areas where your pets are used to running freely. When you do that, you have to be prepared for casualties. In my case, I had to put up big, visible barriers and give a lot of verbal warnings. After about a week, the dogs got the idea. However, they still can’t seem to resist strolling over the soft, compost bed every so often.

Thankfully the plants are matured now, and the tepee’d trellis protects the roots. But, I lost 2 plants to the rampaging dogs, before the trellis was constructed. A third plant managed to survive because it had been beheaded quite high up and managed to re-sprout leaves.

The plants are now about a month old. If the packaging is accurate, I have another 6 weeks to wait until they reach maturity. I’ll keep you posted.