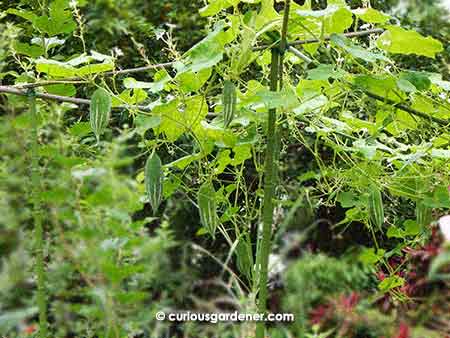 The ever so productive short snake gourd vines…

When the volunteer short snake gourd vine grew last year, our neighbours and I let it run rampant along the fence between our houses, not realising just how vigorous it would be. Not only did it grow atop the chain link fence, but it also climbed over any and everything next to the fence as vines are wont to do. Eventually, we found that it produced more fruits than both our families and all our friends could consume, and several fruits were left unpicked, and ripened and dropped from the vine.

Fast forward to the present, where I found quite a few new volunteer plants growing near the fence. Since I want to still eat the snake gourds, I decided to let one or two keep growing while I pulled out the rest. This time, however, I didn’t want to let the plants have their way, so I made one of my infamous impromptu trellises.

An impromptu trellis in my case means that I make it up as I go along. So I started by first giving the two plants a vertical space to start climbing up. That gave me a little time to think about what to do. One plant is about a metre away from the fence, with the other about half a metre diagonally away from it, further from the fence. This was good because in no way did I want them to latch onto the fence again. However, that posed a challenge, because the opposite direction has an open, flat cement surface. 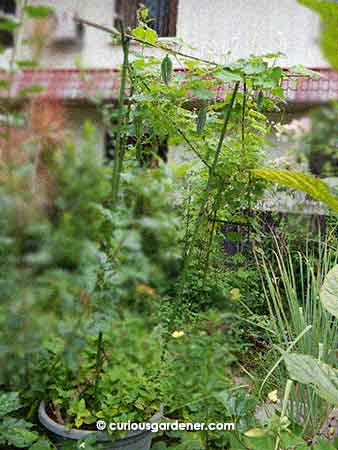 It’s a bit overgrown in there but that’s the pot end of the new snake gourd trellis… Don’t be deceived by the angle of the poles – it looks like an A-frame but it’s not!

I had a few days to ponder this before both plants reached the top of their respective vertical poles, then I had a brainwave. I have a couple of large pots that used to have vining plants growing in them (before I decided to stop growing edible vines in pots – it constrained the size and shortened the life span of the plants). Both pots have the equivalent of a tomato cage in them – nice, tall 2 metre ones. So my idea was to move one of the pots nearer to the snake gourd plants and to link them horizontally to the big pot sitting on the cement. This allowed me to create a 3 metre long by about half a metre wide growing space just above head height, that I’m training the vines to grow along. Any vine that tries to leave the space is either redirected back to the trellis or snipped off.

So far, the strategy is working nicely. The trellis has filled out, and the vines are controlled but still very productive. I like that.