Oh what a busy month this has been! I’ve been out in the garden every weekend, making good use of the garden shredder. There were shrubs and a partially toppled Peacock tree to be pruned, besides the usual gardening activities. It feels just wonderful having only small heaps of mulch rather than the messy piles of branches of the past!

The mulch has been alternatively put into compost heaps and used as a layer on top of a small veg bed I’m developing. The thing about the latter, I’ve found, is that it attracts snails! This has led to nightly “patrols” to check on snail activity, which didn’t start out too bad – I simply tossed the snails I found there over to the compost heaps where I didn’t care what they ate. However, there was the evening of the day that I used a home-made organic fertiliser from my neighbour, and found the veg bed almost swarming with snails of all sizes. I kid not. I have pictures. 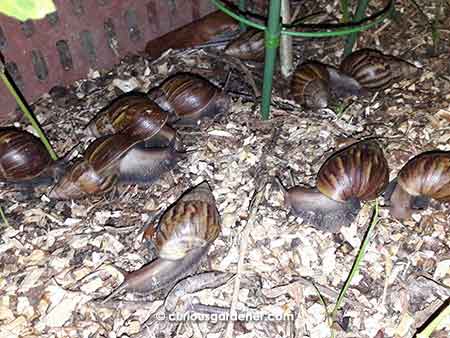 At that point, I was going to bring out the anti-snail pellets. However, I spotted a young toad lurking around the corner and decided that I didn’t want to harm it by accident. So, I left the smaller snails alone, but the big ones (that I couldn’t imagine the toad eating) went on a short, fast flight to the garden wall, if you know what I mean. 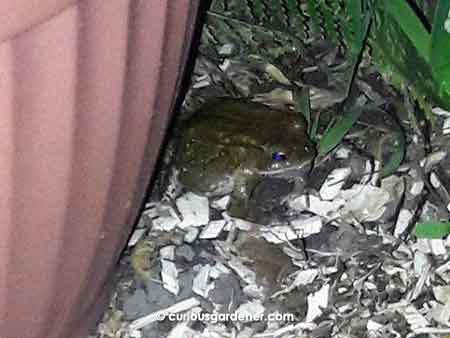 The young toad looking upset that I had thrown away so many snails that it could have feasted upon.

The veg bed has suffered a bit, no thanks to the snails. A couple of young bush bean plants were snacked on, but the okra and brinjal plants that were transplanted from medium sized pots were not as tender and delicious to the snails. I may have to make it a practice to do this from now on, and have already started growing new plants in pots. We are never too old to learn new things, are we? 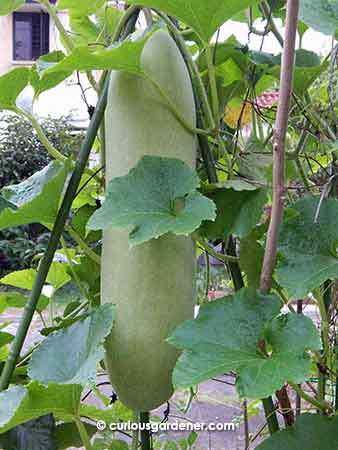 Marrow #3 this season. It’s already half a metre long!

In other parts of the garden, the marrow plant has been rather productive. It has climbed all over the place but I’ve been a little tolerant of that because it has produced three fruits so far. The first one was acceptable, the second was closer to a monster marrow, and the third is still growing on the vine. 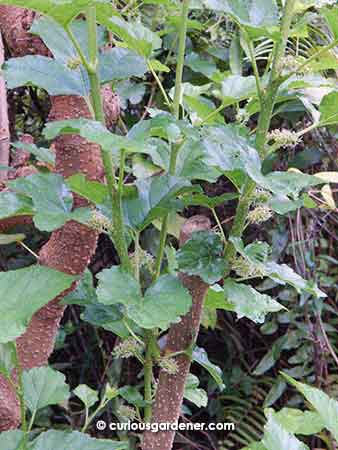 I was also hoping to get more mulberries by letting the plant grow longer branches, but it practically stopped fruiting. So, I finally pruned it all the way back to the main trunk, and it started producing new fruits within a week! 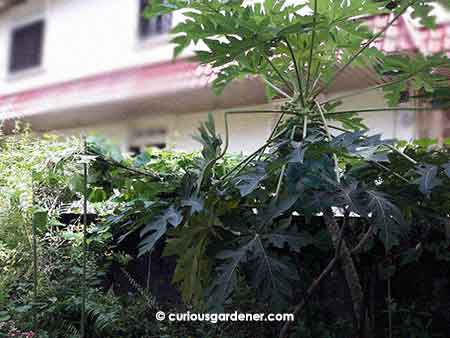 The wrecked papaya tree after the snake gourd vines were removed from it, with the new trellis to its left. I need a bigger trellis!

The snake gourd vine is still meandering around. I thought it was alright it let it grow up the papaya tree until I saw some of the papaya branches breaking under the weight (which I thought would be fairly light, but was wrong) of the vines. So those vines got stripped off the tree and put onto a hastily rigged trellis. The papaya tree is recovering and the snake gourd fruits keep coming. It’s all good.