While I may not always post updates, thank goodness the plants (and critters) just keep doing their own things. So, here are a few random shots of some of the things that have been going on since January… 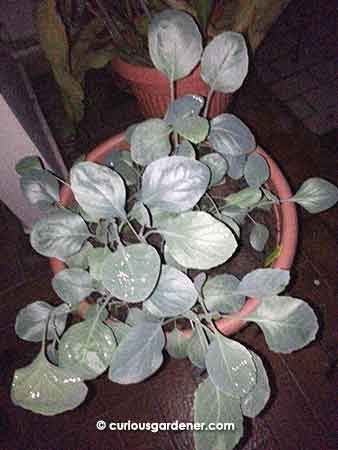 I am inordinately pleased with this planting of Chinese kale. Seeds were sown in this pot in the first week of January and have grown remarkably well. I believe that it’s fine to harvest the older leaves and let the plant keep growing new leaves (we’re going to). This is our first time getting these plants this big. I may test one plant – cut the stem and see if and how it grows after that. 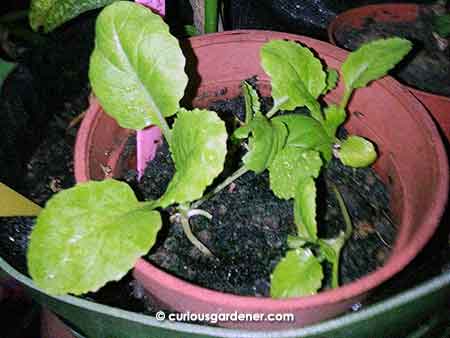 We are attempting to grow more leafy greens, hence the new lot of Chinese cabbage plants here (and elsewhere). I also like these plants because they’re a nice, bright colour and are almost ornamental in how they look. 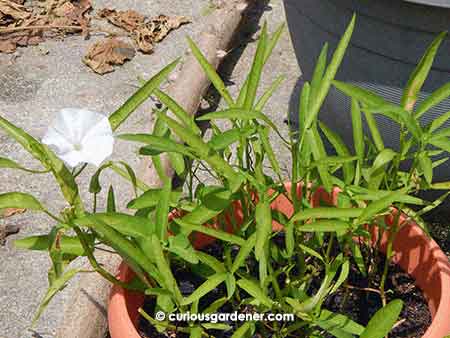 This pot of kangkong was initially “guarded” nearer the house until I realised that it wasn’t growing as well as it could. With trepidation, I moved the pot to a full sun location, and it began to grow much faster. We treat it as a cut and grow again crop. Here, the first flower has bloomed. I am probably going to let it go to seed, just because I like harvesting fresh seeds. :-) 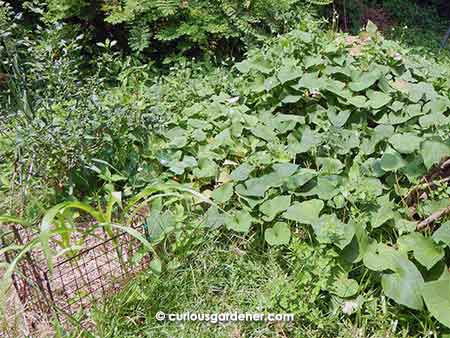 Beneath the mass of leaves here is a large flower pot where four sweet potato vines originate. I hope that there will be potatoes to be harvested this time! For now, though, because there is such an abundance of leaves, we have been snipping off the vine tips for the cooking pot. Oh yes, and to the left are a few corn plants from where I was testing the viability of the seeds. 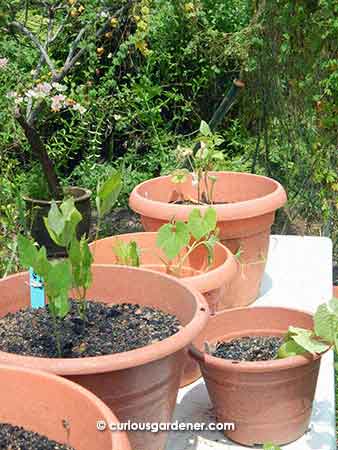 Just a few of the various plants that are being hardened off before I risk putting them out in the garden. These are angled loofah, winged bean and bush bean plants. I want them to have tougher stems before the snails get at them. No, I am not being pessimistic, just realistic. 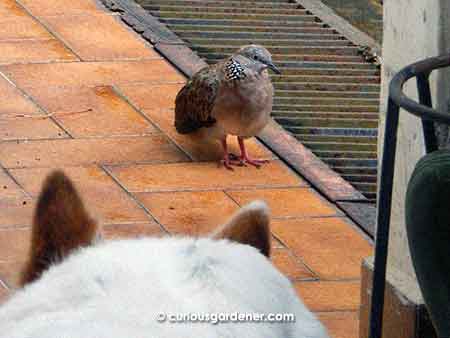 And here’s the baby dove I discovered on New Year’s day – not quite a baby any more, but it was briefly taken under our wing, so to speak, because it looked like it had been abandoned and was very weak and hungry. We had quite a moral struggle whether or not to interfere with nature, but we finally decided that it was okay to feed the little thing, and it has survived to today. We also trained the dogs not to attack it, and they seem to have accepted that doves are now untouchable; cheeky mynahs, however, still get chased!