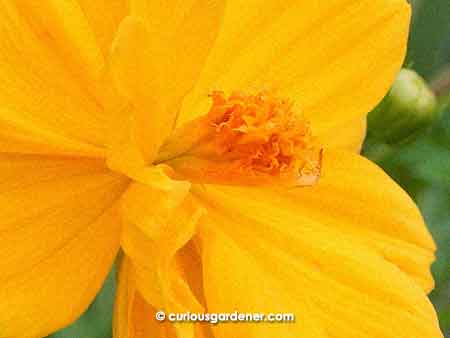 Here’s where the seed-making magic begins – waiting for the pollinators to do their work.

We used to have a patch of cosmos flowers. I loved those flowers. Their cheery yellow colour could be seen from quite a distance when the plants were in bloom. What’s more, they were self-seeding plants – they had lots of seeds that kept falling and growing new plants. I took for granted that they would look after themselves. 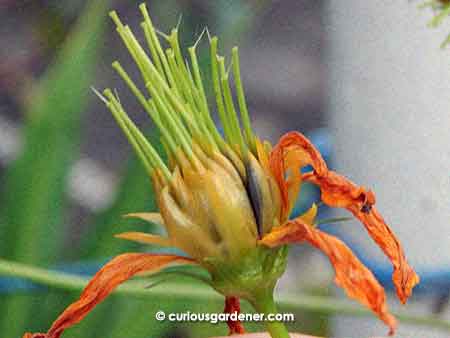 After the flower gets pollinated, the seeds start to form…

I was wrong. For several reasons, the plants died out, and because I had been complacent, I did not have seeds ready to grow new plants.

Fast-forward to this year, when I made it a point to look out for cosmos plants so I could harvest seeds, and as luck would have it, one of our neighbours grew an orange cosmos plant out by the roadside several months ago. I watched that plant slyly, waiting for the flowers, and for the seed heads that would follow. 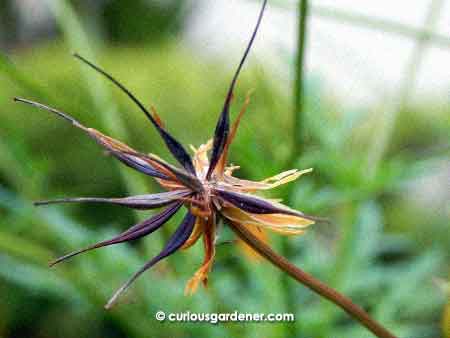 When the seeds are ready, they spread apart, waiting to be dislodged, so that they can start the next generation of plants.

It took a while for the seeds to appear, perhaps because the plant was right at the roadside, which may have deterred pollinators. The seeds that first came out were few and far between, but I pounced on them when I could. Thanks to that – and other seed quests – I’ve managed to reintroduce the cheery flowers to our garden once again. Orange and yellow cosmos flowers now brighten up the place, and I actively harvest the seeds and have been scattering them around. I hope that in a few months, there will be even more flowers everywhere! 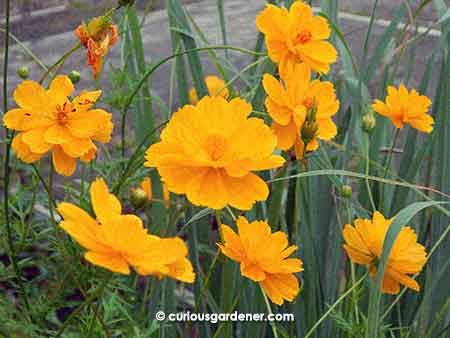 Isn’t this a lovely view? They’re pretty, and they attract pollinators! Win-win!

Of course, I will also store some with my other seeds in the fridge, just in case they get wiped out again. Seed saving is an important practice that we often forget, and it can also lead to seed sharing, which is how I got my first cosmos plants – from some kind soul at the GCS forum. Saving seeds from your own plants also means that they are already acclimatised and will be more hardy than purchased seeds from other countries. Save what you can!