The custard apple plant grew steadily when it was first placed out in the garden. Surprisingly, it has not taken root through the container yet.

A friend gave me some custard apple seeds last year because she had eaten the fruit and found it so delicious that she HAD to save the seeds and share them. I admit I wasn’t too sure whether I wanted to grow the custard apple, but because I love growing plants from seeds, I sowed a couple anyway. Only one germinated, and when it grew a few sets of true leaves, I put it in a medium container and set it out in the garden. 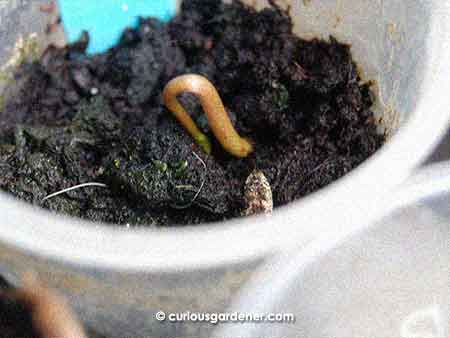 It looks like an incey-wincey worm but this is just the stem of the custard apple sprout before the head emerged.

I first placed it in a protected corner between a trellis and some bushy plants that started intruding into its space. However, it seemed to appreciate the spot, and even branched out, growing a secondary stem. I thought it would do better with more space, so I moved it away from the other plants to get more sunshine. What happened next? Because it was now exposed, the leaves were attacked by beetles and/or grasshoppers, and it was stripped bare. I was disappointed and stuck it back in the original corner where I would not see the bare stems and feel depressed. However, because plants are so tenacious, it grew new leaves and recovered! I have left it in that spot since it seems to like it, and thought that would be it for a while because it’s not growing all that fast.

And here’s the little star of this post – the miniature custard apple fruit. It’s adorable!

Well, when I was pruning the plants around it this week, I had the shock of my life, because there was a tiny custard apple dangling off one of the stems! I don’t know if it will grow to maturity, but it’s the cutest little thing! If it does make it to harvest, I’ve read that it will be a wait of 20 to 25 weeks.