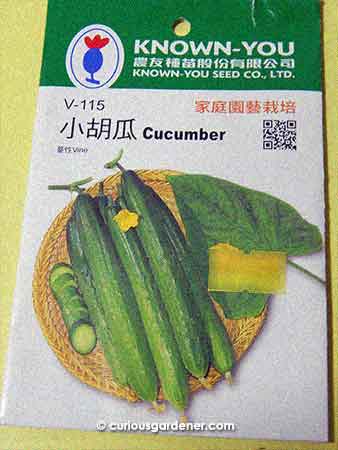 Two things prompted me to choose to buy these seeds – the reputable brand name, and the thin, long cucumbers (I wanted to try a different variety).

We’ve grown yard long beans that lived up to their name, and now we’ve grown foot long cucumbers that also live up to their reputation.

I’m talking about the ones grown from the Known-You seeds. The information on the seed packet was that they would be ready for harvest when they reached 20cm long.

Well, you know me – I waited until they reached the usual cucumber harvest-ready requirements (for me, anyway). Basically, the flower at the tip of the fruit has to be really dried up, and the little spines on the exterior of the cucumbers have to fall off easily.

If you’re in Singapore right now, you’ll know that the weather has been unusually hot since late February, and this caused the cucumber plants to delay setting fruit, even though we’ve been making a valiant effort to keep the plants watered. I even added a good layer of Greenback compost as well as mulch to keep the moisture locked in. Maybe the changes made the plants pause a little longer as everything settled in – who knows… But, cucumbers finally began to make an appearance, and are now a welcome sight on the trellis. 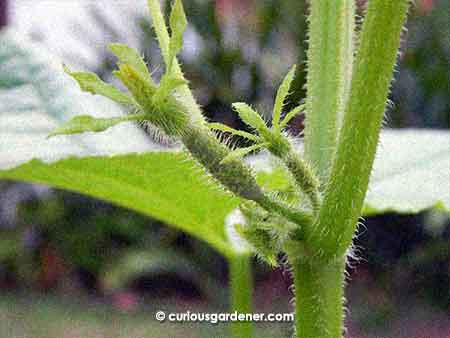 I like that these plants are anxious to fruit profusely.

Like I said earlier, the information on the seed packet said to harvest the cucumbers when they were around 20cm long. The first one that grew was below average, probably because the plants were stressed by the heat when it was growing. It was quite fat, but was short and curved, with a bit of a ridge, like a diving whale’s back. I wasn’t terribly impressed by the flavour either. 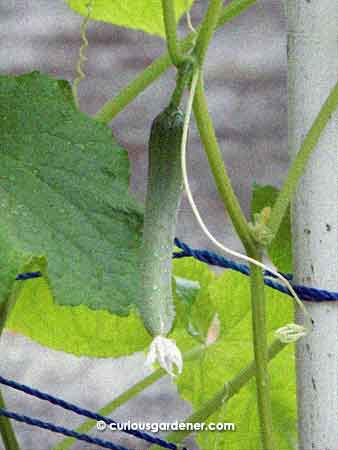 You know the fruit has set when the base of it (near the stem) turns dark green instead of remaining the same colour as the rest of the fruit bud.

Well, it’s been raining a bit more over the last week or so, and the cucumbers that showed up after the pioneer did much better. In fact, because I was waiting for my usual signs of harvestability, they grew longer than they were predicted to! The guide was to wait until they were 20cm long (about 8 inches), but these babies have grown almost 1 foot long! 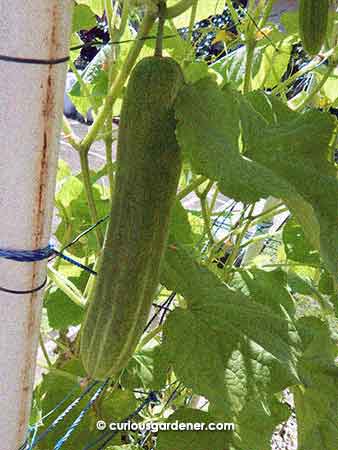 This is one of the big cucumbers…

We harvested the first of the big fruits today, and it was just about a foot long. The spikes on the skin were quite easily rubbed off, and the flower bud was still attached. Comparing it to the picture on the seed packet, I think it’s supposed to be plucked when it’s younger (skinnier and darker). As a matter of fact, I thought, from the photo, that they were Japanese cucumbers (the skinny, long, dark green cucumbers), so when these began to lighten and show their stripes, I thought I’d been deceived. Sadly, it’s just my bad memory… 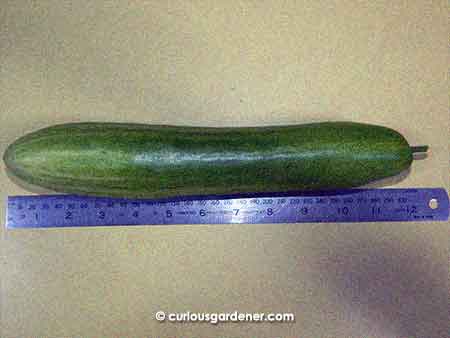 Today’s harvest was a pretty hefty one!

Well, this cucumber tasted much better than the first one. It didn’t have the hint of bitterness, and the pith that the seeds were embedded in was juicy and sweet. I definitely could have plucked it sooner, because some of the seeds were too well formed and had to be discarded. However, it was such a treat to go out into the garden and harvest it for immediate use in a salad. That is exactly why I like growing as many fruits and vegetables as possible. If you have enough sunlight hitting your garden or balcony, you can try making a small trellis to grow your own cucumbers, too. Apart from the watering, they’re quite low-maintenance. I’m happy our plants have finally matured, because cucumbers will be welcome in the hot weather that’s predicted to last for a while longer.