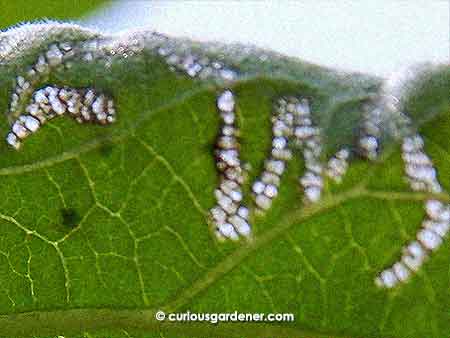 What artistic creature caused these holes in the eggplant leaves?

They were actually quite artistic – patterns of little holes scattered around the leaves – most unlike the normal caterpillar behaviour of eat-everything-until-nothing-is-left. So I went on a visual hunt and found this: 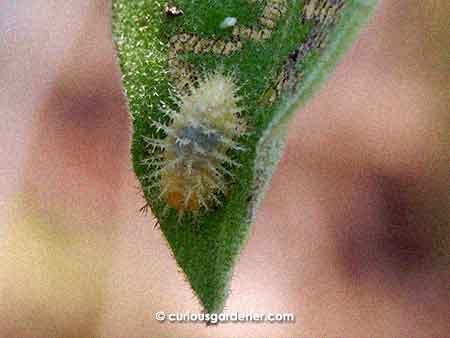 At first glance, I thought this was a hairy caterpillar.

My next thought was that it was some variety of hairy caterpillar, but then I thought it looked too round and fat to be one. 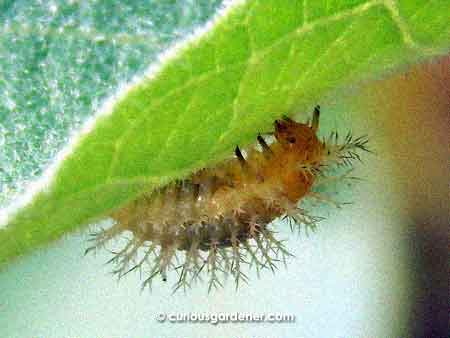 After a few more photos that I scrutinised carefully, I thought the body shape was rather beetle-like. In fact, the head reminded me of ladybug larvae…

So, I got in touch with Sean Yap from National Parks Board’s National Biodiversity Centre who conducted the local ladybug survey a year or so back, and asked him for help. He confirmed that is is indeed a ladybug larva – either Epilachna sp. or Henosepilachna sp., which are the only plant-eating ladybugs.

This was highly interesting to me. I had started out thinking that ladybugs ate only aphids and other garden pests, but over time, found that the yellow ones feed on powdery mildew (which is why I don’t mind it too much when this happens to our plants as I’ll get to see these insects), and now I know the ones with the spiky larvae eat leaves.

I wasn’t successful in following the life cycle of these larvae (there were at least two), so I don’t know what the adults look like. However, I did manage to catch some footage of one of the larvae creating part of its masterpiece. Enjoy!