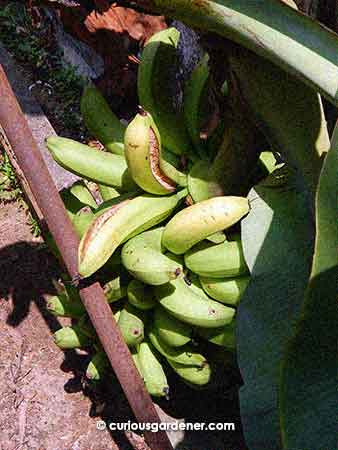 Bananas splitting open on the plant. What?!!!

No, I’m not talking about the dessert with ice cream, etc. Bananas splitting open is what happened with the bananas on the plant that we got from the Weed family – and I mean while the fruits were still on the plant! 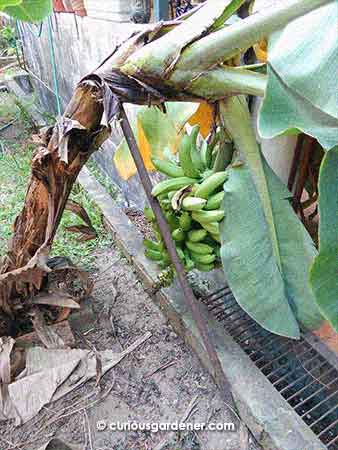 The Leaning Plant of Bananas…When bananas are too heavy, they’re just too heavy…

We’d been waiting for the signal banana to show up before harvesting the fruits, and in the meantime, the weight of the fruits had been pulling the whole plant downwards. I propped it up, but it kept leaning more and more, and even the crown of the plant began to re-align itself until it looked like some weird hunchbacked banana plant. Things began to get worse when the weight of the fruits put so much strain on the plant that the main stem began to split.

Then, a few days ago, I noticed that one of the fruits had split open, thus inviting insects to the plant. I cut it off, but then another one split, and then another. Finally, today, I decided to harvest the whole bunch because we’ve been losing more fruits to the Split. 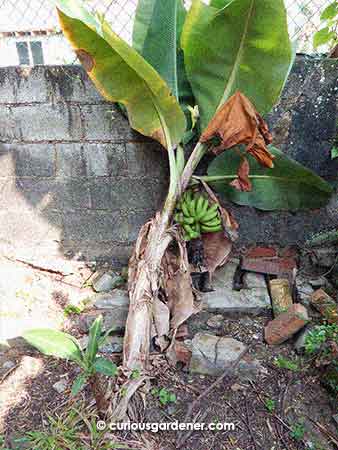 The other banana plant leaning against the wall. Man, it’s tiring holding up a bunch of bananas…

Since we’d harvested these bananas, I checked on our other plant, and found it leaning against the wall behind it, with the fruits between the stem and the wall (banana version of being caught between a rock and a hard place – haha!). I propped it up with a pole and went in search of some strong string or rope to hold it up – and in that space of a minute or two, the whole plant fell over and uprooted itself. That left me with the option of continuing my efforts to get it into an upright position or harvest the fruits. I harvested the fruits. 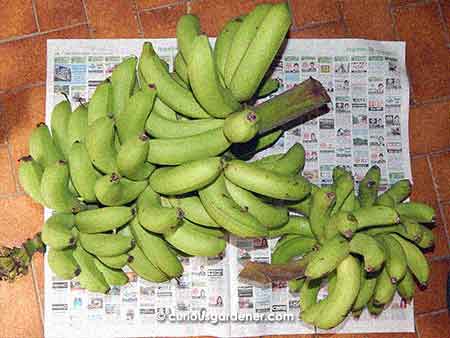 Our beautiful banana harvest – big bunch on the top left from the Weed family’s plant and the more modest bunch from our older plant.

So as you can see, we’ve got the two bunches of bananas, of very different quality. Our other tree was growing in a place where I believe it was getting strangled by the roots of surrounding trees, and the plant and fruits were both struggling as a result. I will be moving the new sucker elsewhere in the hopes it will be healthier than its predecessor. In the meantime, we’ll be waiting for these bananas to ripen before we can enjoy them. You can bet that we’ll be thinking of and thanking the Weeds and our other friend when we eat the fruits from the plants they gave us!