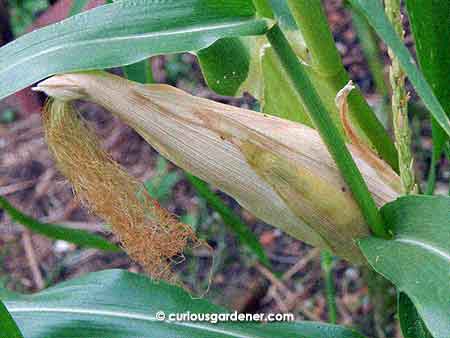 The sign that this corn is ready to be harvested – the outer leaves turn brown, and the silks are still not completely dried out.

A couple of days ago, I noticed that one of the cobs on the white corn plants had started drying up, so I sent a message to our friend in Thailand to ask for instructions. Imagine my glee when I was told that this was one of the signals that the corn was ready to harvest! (I thought that we had to wait for the silks to turn brown, but they were still greenish at the time.)

First, however, I was told to peel the cob a bit, to see if any kernels had formed. I thought I would have to strip the cob completely, but after pulling down two or three leaves, I could see the outline of kernels at the lower part of the cob – not unlike nicely formed abs under a skintight T-shirt… 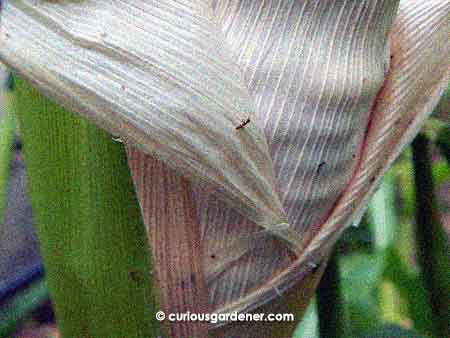 Look at the outlines of those kernels under the leaves!

There were, however, several insects that looked like they were about to make the cob their home, so I quickly snapped it off the plant and checked the other plants for other harvestable cobs. I found two. They were all rather small, though, with the largest of the lot around 14cm long. But, after seeing how the bees had happily taken the pollen, I’m grateful that we had even these to harvest!

The corn is not pure white – it is actually bi-coloured with shades of purple and white, and is rather pretty. In fact, it reminded me a little of the gorgeous glass gem corn. 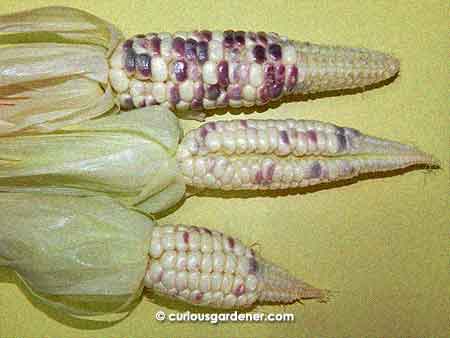 Gorgeous glutinous corn! Stunted, and could have had more kernels, but pretty to look at (and yummy to eat)!

To eat them, I was instructed to boil the cobs until cooked, then add some salt and let them continue cooking for a couple more minutes before draining and eating them. It was our first time eating glutinous corn, and we found the skin of the kernels a little hard (until bitten through) and the inside of the kernels soft and sticky in texture. It didn’t have a strong flavour but carried that fresh-from-the-garden taste. I can’t wait to harvest the bigger cobs!