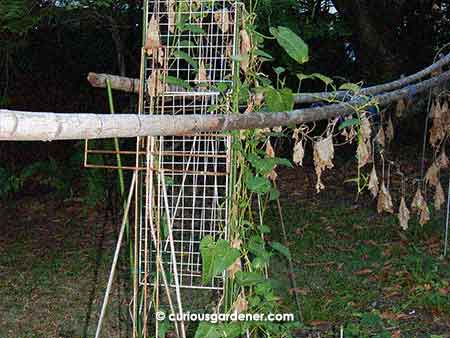 You may remember this trellis. Apart from the time to cure the wood, it was the fastest structure I’ve put up (the 2 poles and the metal stands, not the wire grid also in the picture).

Many months ago, I chopped down a couple of palm tree branches and decided to try to recycle them in the garden. After allowing them to dry out for several weeks, I propped them atop some recycled metal stands and used them as a trellis for our marrow plants. They were nice and strong, and served their purpose beautifully. After the plants died out, the trellis became more of a bird perch, which I’ll post about later on. Since I now have a new set of marrow plants that are due to be planted out, I went to check on the trellis and found some interesting growths on one of the poles… 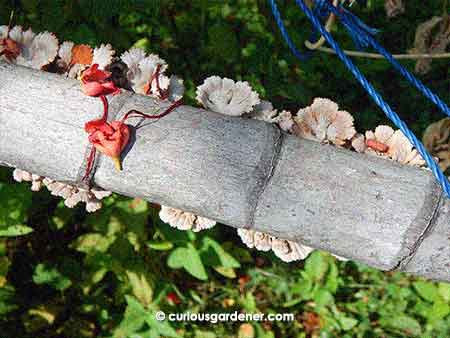 What odd looking lumps of white were these, I wondered. Thankfully, they were not clusters of mealybugs, which was my first fear. This is a view of the fungi from above. The orange things are fallen petals from the peacock tree, which shades the area.

Since I’ve found mealybugs in other areas of the garden lately, my first concern was that this was another colony of them. However, this turned out to be some sort of mushroom or fungi at work on the wood. 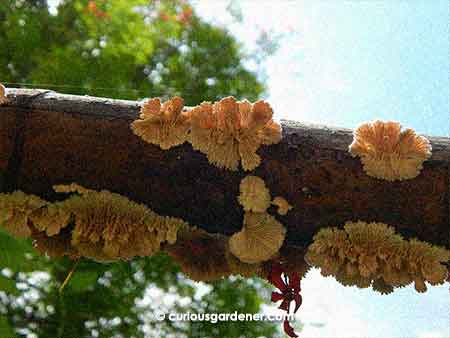 Since I’m just curious, I looked at the growths from the bottom and got this beautiful shot of them – to me, they resemble coral formations. 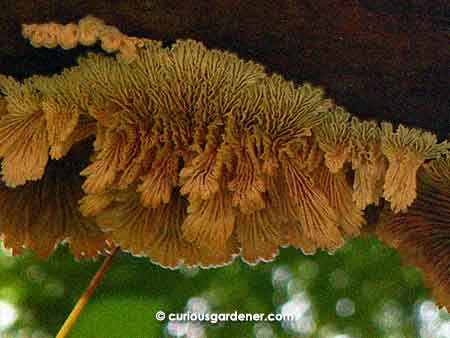 And a closer view from the bottom… Really looks like coral, doesn’t it?

Fungi are essential in the decomposition process, and seeing that the pole is organic matter, it stands to reason that they should grow there. However, since I’d like to keep using this particular pole as a plant support, I’ll scrape off the fungi for now and defer decomposition for a while – if I can. It really pleases me to have been able to re-use the palm tree in this manner. 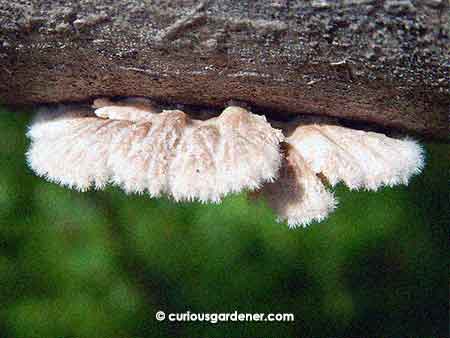 An even closer view of the fungi from the side.

Most people would say “Ewww!” but I think the way nature works is amazing. You find beauty in the most unexpected of places.