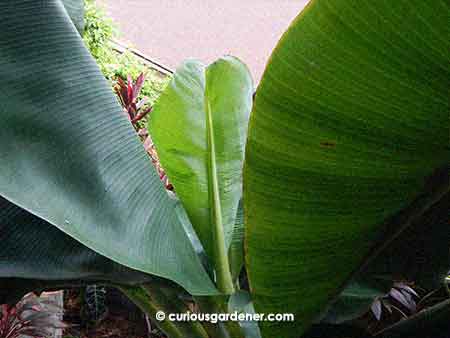 Peek-a-boo! It’s the spade leaf peeking out between the normal banana leaves.

It’s quite fortuitous that this happened now, because we just met up with the Weed family, and the plant that they gave us has finally done something great.

I’m talking about the not-so-miniature banana tree finally sending up its spade leaf!

Banana leaves usually appear as a tightly furled narrow “rod” with a cute curly “piggy tail” at the tip. The leaves only open up when the entire length of the leaf has grown out. It’s quite amazing, when I think about it. 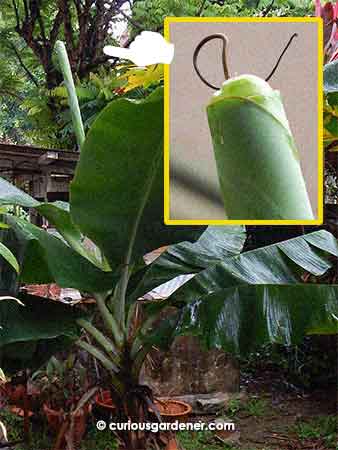 A distant shot of a banana leaf still growing out (the “rod”) with a closer view of the tip of the leaf with the curious thin, curly brown tip.

Well, I’ve been watching the plant closely – my threats to it didn’t work as fast as I wanted – but I felt it was close to maturity anyway. I had a false alarm last week when I thought the spade leaf had grown out, but it was just one of the leaves that had torn and appeared short. This time, however, I am confident that the spade leaf has made its grand entrance.

It’s short and already unfurled – and obviously not torn – so the next thing we’ll be watching for is the banana bell, which will be followed by FRUITS!

That should take several weeks more. Unlike young Master Weed, I’ll just observe what the plant does. It obviously doesn’t take me seriously enough to hurry when I tell it to hurry, after all…

On a side note, to give credit to Mother Weed’s description of this plant being 4 to 5 feet tall, I’ll admit that it’s about that height from the base to the top of the stem. It’s just that it has those big, long floppy leaves that make it seem so much larger! 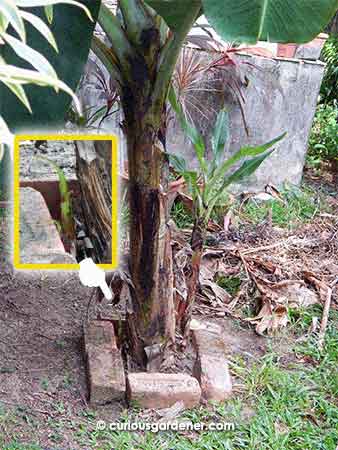 I see how the banana plant is trying to balance itself out – the first sucker came out on the right, and now, a new one is starting to grow on the opposite side of the plant.

Oh yes, and the plant is already growing out Sucker Number 2. As you can see, I’ve not removed the first one yet because I’m behind on my gardening. It’s not my fault – I only have time on the weekends to get into gardening things that take time and make you sweat, and the weather has been most uncooperative of late. I guess I’ll get to this later than sooner.