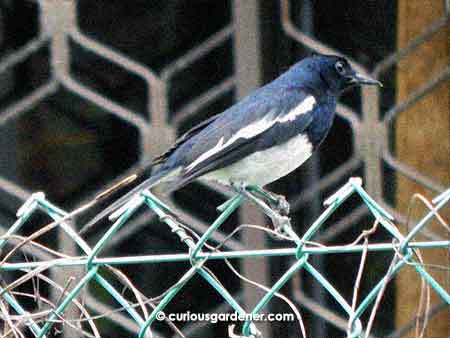 The male magpie robin (I think!). Such a striking bird with the contrasting black and white!

It’s been quite a few months since we became aware of the magpie robin in the neighbourhood. My mum was the first to recognise it, because they used to be more common decades ago. I thought the birdsong was from the glossy starling, which also has a musical call – but then again, I’m not an expert…

We’ve sighted the magpie robin several times – usually a black bird that flies away with a flash of white – but it’s been frustratingly difficult to catch it on camera, because once it knows it’s been seen, off it goes.

I’ve read that this bird can be quite comfortable around people, but the ones here aren’t – my photos were taken with a long range zoom lens. 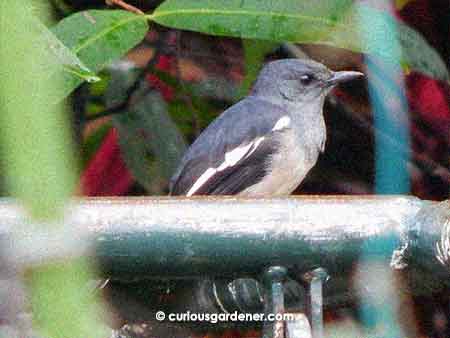 Either a female or juvenile magpie robin – I’m not sure because they both have grey chests.

A little more research told me that magpie robins used to be plentiful here in the early part of the 1900s, but they ran into trouble because of several factors. They were popular in the pet trade because of their pretty birdsong and were highly trapped. In the wild, they were also ousted by mynahs and the loss of their natural habitats as Singapore “progressed”. As a matter of fact, they almost became extinct here, even in spite of re-introduction efforts in the 1980s. If I were them, I’d be cautious around people, too.

They’re pretty perky looking, though. I haven’t caught it in a photo yet, but magpie robins have the tendency to cock their tails as they hop around. It’s pretty cute.

It is really nice to know that they are making a comeback in our neighbourhood now. As a matter of fact, we hope there is a nest nearby, because from the photos I’ve managed to take, I think one is a male and the other a female, or maybe a juvenile. It’s most likely that they’re coming here to look for food, though, because our garden is far from manicured and is home to insects and other invertebrates, that many other birds come by to feed on as well.

I was quite happy that I managed to catch a snippet of the magpie robin as it was singing on our neighbour’s roof:

I wish it had been longer, but the bird spotted me and flew off immediately.

I do hope that the magpie robins get used to us in the same way the mynahs are, so that we can observe them more closely. (Mynahs follow practically at my heels when I’m mowing the lawn, the cheeky things!)

To learn more about magpie robins, you can visit these pages:

With luck, I’ll have more to share about these birds in the future.