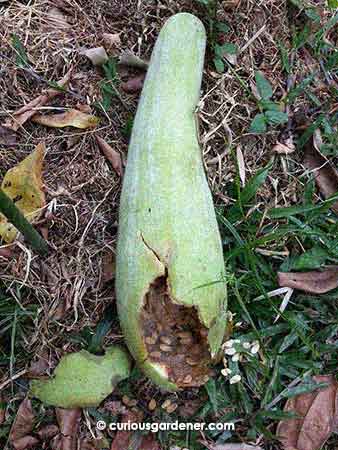 This marrow broke open when it was aborted by the vine during the drought.

The 2-month drought may have killed off our third marrow, but the rain has apparently brought about new life.

I was so disheartened by the havoc wreaked on our plants during the drought that I barely did much gardening at that time, so the half-grown fruit that aborted during the dry season remained on the ground, where it slowly decomposed. 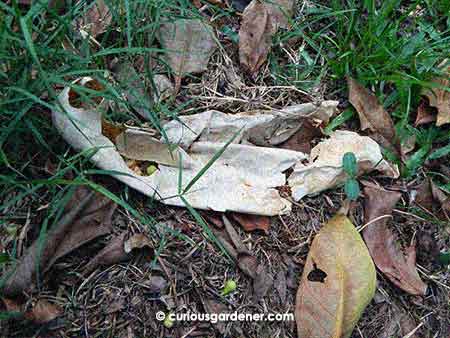 The outer skin of the fruit that remained after about 2 months.

Through this, I learned that the skin of the marrow is pretty tough. The softer interior of the fruit disappeared, leaving a papery skin behind that has only recently begun to crack and tear open. 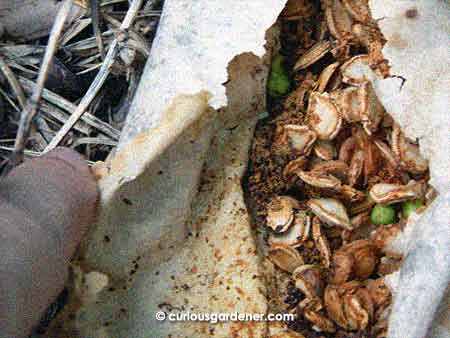 Quite a mass of seeds remained within the skin of the fruit, but they looked smaller than those from the mature fruits, so I left them there. The round green things you see are young fruits dropped by the jambu tree, which is just overhead.

While I saw a mass of seeds inside, I figured that the fruit had not been very mature when it dropped, so the seeds wouldn’t be viable.

Yeah, I was wrong. 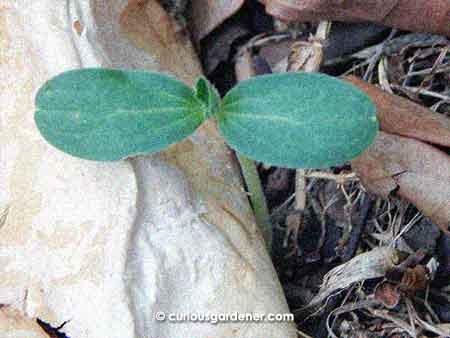 One of the new marrow sprouts. I do love seeing sprouting veggie plants!

Thanks to the rain, a couple of the seeds have germinated. The sprouts have that distinctive cucurbit look, so I’m certain these are marrow plants. Now I have a few days to decide whether to leave them there (if the snails don’t feast on them first) or to move them – but once again, I need to work on more trellises… Hmm. Maybe I’ll leave them there for now.