I absolutely cannot see a part of a plant that shows some potential of life without attempting to encourage more growth. Last week, my mum – from whom I obviously inherited my sense of curiosity – was browsing around some shops when she noticed some interesting pink beans on sale. When she asked about them, she was told that the beans were from Myanmar and were usually cooked in soup. Ever game to try something new, she got a recipe and bought some beans. 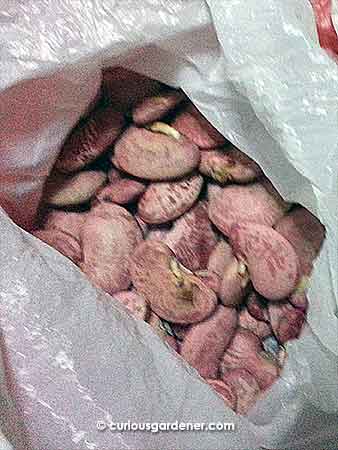 My first view of the beans – and I was firstly, entranced by their colour; and secondly, interested that several were showing signs of germination…

Now, when I was inspecting the beans, I noticed that a few of them were showing signs of germination. With my mum’s blessing, I took three that looked like they could grow, and sowed them in small pots, one per pot. 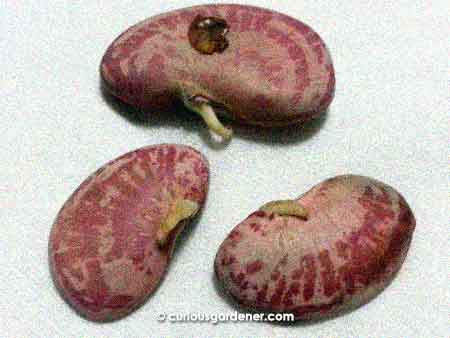 The lucky three beans that I chose to plant. 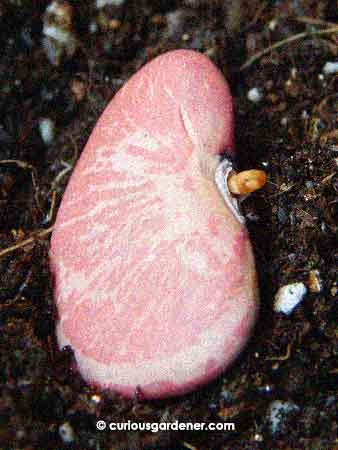 A closer look, because I’m quite fascinated with the beans. Isn’t it cool how much like a lung it looks? I also have to own up that I didn’t sow the seeds for about two days after choosing them – they remained wrapped in a bit of tissue before I sowed them, which is why I’m doubly thrilled that they actually, ALL, germinated!

One thing that worried me was that the beans were already somewhat soft, and I wondered if they might rot if I watered them too much. So, I moistened the soil very tentatively the first day, and waited until it dried out the next day before I watered again. This continued for almost a week before we saw this: 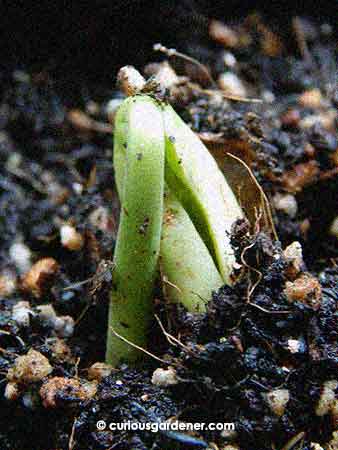 Ladies and gentlemen, we have the first red flat bean sprout! The other two were also stirring but not as advanced as this one.

Yes, amazingly, it was three for three! It was just this morning that we saw the first sprout, and the other pair starting to emerge. I expect they will both be up and all will bear their seed leaves over this weekend.

I tried Googling the beans and found that they are “red flat” kidney beans from Myanmar. Another good thing I discovered is that they are organic. Will they be climbers or bush beans? I’m guessing the former. As with all my first-time plants, I will probably let the plants grow and do what they want to, just to observe what happens. Well, I hope they grow, and grow well!