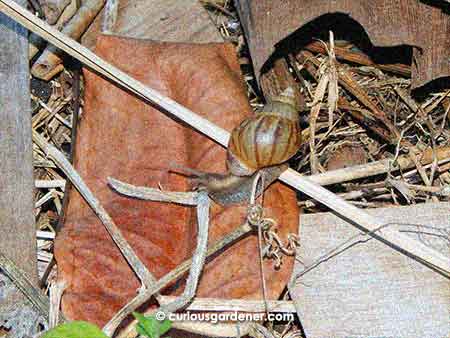 The advance party? I’m sure we’ll see more of these very soon, now that the weather is more to their liking.

The extended drought was quite unkind to many of our plants. It was such a challenge to keep them suitably watered, and hard choices had to be made. The grass was left to its own devices (I’m sure everything will be nice and green again by next weekend, if not sooner – grass is that tenacious); and only “precious” plants were watered by hand to conserve water. Seasonal veggies were also allowed to die out after they had fruited (where possible – some plants were not so lucky). 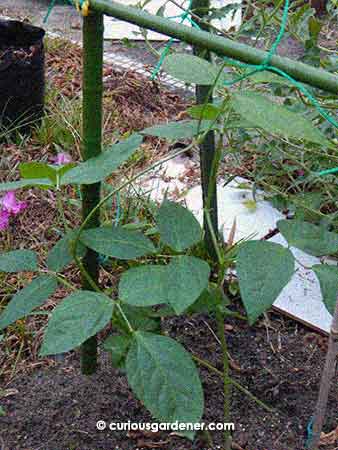 Three precious long bean plants that were just planted out in the garden (as opposed to kept carefully under shelter where we’d remember to water the young plants).

Thankfully, the weather has finally changed, and the plants are beginning to perk up again, as is my mood for gardening. However, there’s a lot of work to be done as I had left dying plants and leaf litter where they were, to try to provide mulch cover. However, I eventually realised that mulching would only work if there was some moisture beneath the fallen leaves – and we all know that between the dry air and heavy haze, there was none to be had.

Now that it’s raining again, the leaf litter is beginning to break down as it should (finally!). It had been so frustrating watching what were supposed to be compost heaps just remain as piles of dry garden litter. The dampness has also drawn our friend/foe the garden snail out from wherever they had taken refuge. (Take note, fellow gardeners, the snails are a-coming!)

I’m looking forward to my weekend workouts in the garden once again and hope that the change in weather will mean that more plants will be open to growing again. Out of more than 20 bean seeds that I sowed since late December, only 3 plants are growing. They just got planted out at the bean trellis where we hope they grow happily. I’m especially looking forward to growing more okra plants, which are usually the easiest to grow, but did not germinate. We are still watering the sowing pots in the hopes that the seeds planted in Jan/Feb will finally decide to start growing. It’s not impossible. However we will use new seeds soon, if nothing starts happening.

These are the plants that are still hanging on: 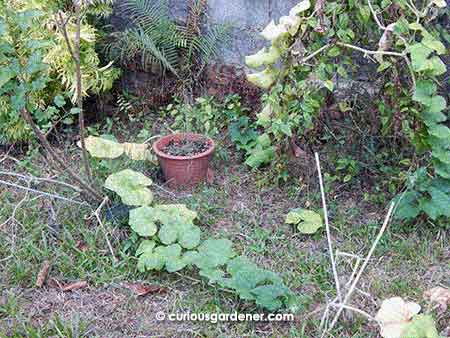 Not a “patch” any more, this is what’s left of the pumpkin plants. 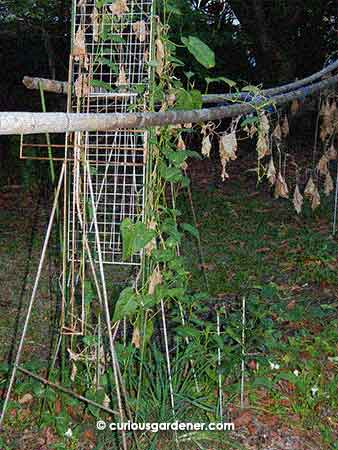 The kangkong plants are a surprise survivor because we didn’t go out of our way to water them at all. Aren’t they supposed to be water-loving plants? They provided ground cover under the marrow trellis, and eventually climbed up to take over the trellis when the marrow plant died off.

The watermelon plant may make a comeback after being relieved of the first fruit. It has been growing new side stems since we harvested the watermelon last week. I’m wondering whether the bittergourd plants will be able to recover or not, too. They had struggled valiantly through the drought but don’t look particularly robust. The same with our chilli plant. It bore just three chillis but aborted them before they could mature, no thanks to the harsh weather. Will these plants persevere? I hope so. For now, I’ll say thank goodness the drought is over so that everything can get back to normal. It’s been odd not having grass to mow on the weekends, and having things pretty much grind to a standstill. There’s lots to do, but it feels like nature has balanced itself once again.