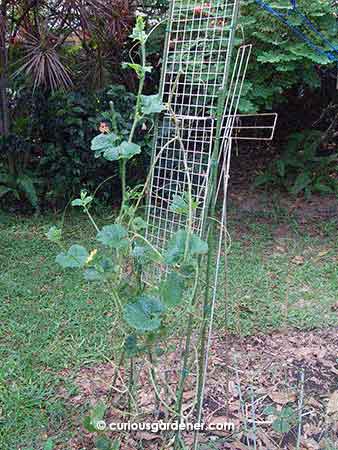 What I was left with after pruning the old stems in December.

Well… I didn’t mean that quite literally, but after the plant produced the two marrows, I expected it to die off. In fact, a large portion of it did die off, and when I started cutting those sections away, I expected to be left with nothing. However, it was a pleasant surprise to find new vines branching out from the main stem, and the optimist in me decided to see if the plant wanted to go for another round.

Since I had the opportunity, I also decided to make a stronger trellis. 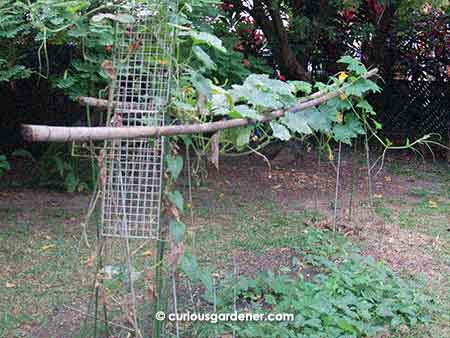 Not much thought went into this structure – basically, the long, tough poles were put atop the metal flower stands. You can’t get any simpler than that!

A couple of months ago, I had started thinning down a palm tree clump that was getting too large for my liking. It was not easy to do because the taller stems are very tough and fibrous to cut through. As such, I had only cut two of the taller stems before resorting to working on the younger ones. I also had the idea to recycle these stems as building materials for my trellises. Alas, the younger stems eventually rotted and had to be discarded. The two long stems, however, were just what I needed for the marrow trellis – after letting them dry in the sun for several weeks.

The metal flower stands were once again called into service. All I did was slip the ends of the palm stems through or over the tops of the stands and then drape the marrow vines over them. It seemed safe to assume that they will provide more than enough support should any more monster marrows decide to grow. 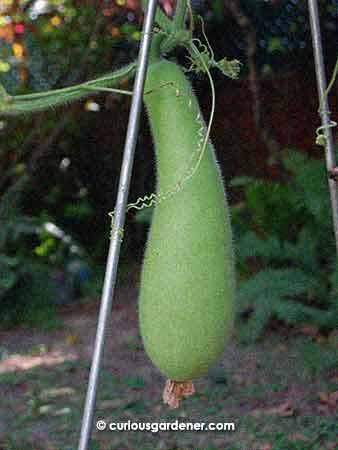 This marrow is in the rapid stage of growth. It’s only over a week old, and is almost a foot long! We have to try to make sure it gets sufficient water, though, seeing that the dry monsoons are blowing now.

I’d like to introduce our latest marrow. Marrow III came into existence just last week, and we can’t wait to see if it will follow in the footsteps of its predecessors – and whether more fruits will grow!