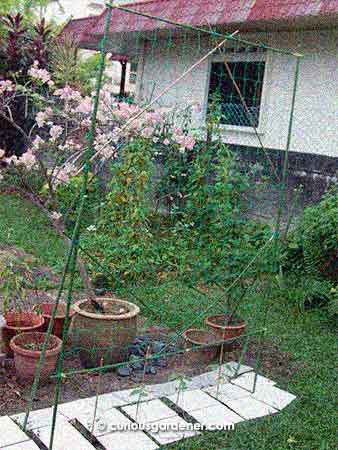 The new long bean trellis. I’ve found that just this frame is sufficient for the long beans – although if I get ambitious enough, I could add more at a later date…

Well, I knew that I would have to get down to some serious DIY work when I got my seeds out for planting. Between long beans, climbing gourds and cucumbers, support structures had to be set up.

In anticipation of this, I made a quick stop at Daiso to get some garden nets – what I usually think of as future football goals… The only problem was, I would have to put together something for the nets to be set up on. 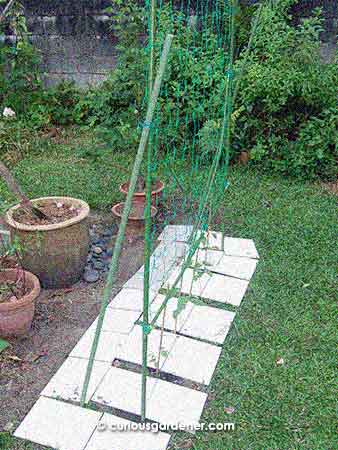 This time, with the use of stones surrounding the trellis legs, I only needed one brace on either side to keep the structure stable. Live and learn!

Last Sunday, I had no choice but to start being creative, because we had a few long bean sprouts that were growing rather rapidly in a flower pot. I am trying to break my bad habit of putting off planting out young plants before it’s too late, you see… So, I rummaged through my stash of new and used poles, and put together a squarish frame with legs that could be pushed into the ground.

Four sticks lashed together at four corners doesn’t make a very stable frame, so I had to add diagonal supports at the corners to stop the frame from trying to become a diamond instead of being a rectangle. I have to admit that I’m now getting quite proficient at lashing these sticks together!

Then, to set up the frame, I dug holes where the legs would go in, and added some stones around the legs as I filled the holes with earth. That really helped to stabilize the frame. However, the usual slanting braces were necessary, just in case. 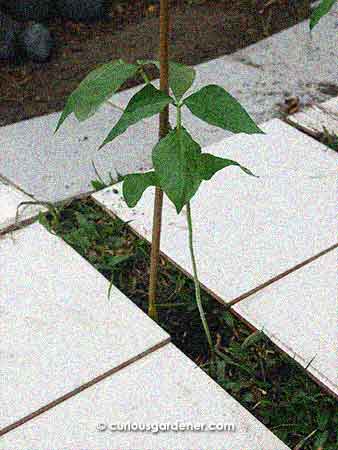 With the netting in, it looks pretty impressive! The first seedlings were planted out, and I decided to experiment with some odd tiles we had lying around. You know how weeds tend to grow well between cracks in cement? Well, I decided to play with that concept, to use the tiles as a kind of mulch – also because when you leave solid things on the grass for long periods, you tend to find lots of happy worms living beneath them when you lift the things up. We’ll see how this works out.

So that’s it for the bean trellis. There will be more on the DIY attempts shortly…