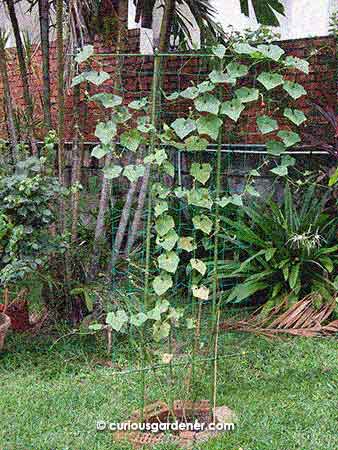 Phase 1 of the loofah trellis – a vertical frame with string netting for the vine to climb on.

Our angled loofah plants reached the top of their Phase 1 home – the vertical trellis – and looked like they wanted to spread out some more. Since I had anticipated this, I had started the plants off near a palm tree clump. My plan was to extend the trellis horizontally, towards the palm tree.

The first step was to link the top of the vertical trellis to the palm tree. Three pieces of thin nylon rope were used, secured on either end and the middle of the top bar, with the other end of each tied to a different stem of the palm tree. This gave me three parallel ropes that I tried to keep at the same level.

Next, I tied on shorter strings to intersect the three parallel ropes, creating a series of grids. A neat trick was to loosely knot the new string around the middle rope first, then tie off the end to the outside rope. This allowed me to then adjust the tension before tightening the knot on the middle and securing the other end.

It was a fairly straightforward task that took only about 15 minutes to do. All I had to do after that was train the dangling vines onto the new, horizontal surface, and my job was done. It will take a few days more to make the plant aware that Phase 2 is now ready, but that’s expected. 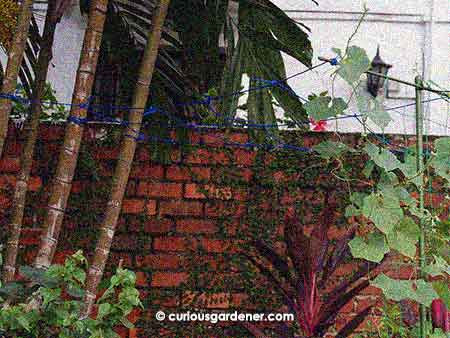 Phase 2 of the loofah trellis – more string grids for a horizontal surface.

You may question why I chose to train the vine towards a taller plant – am I worried the vine will climb up and away? Well, I tried that before, and found that palm tree stems aren’t very conducive for vines with tendrils to climb up – they’re too smooth and wide for tendrils to attach themselves to. Twining plants would be able to wind around the stems, though. However, the angled loofah will probably reach around but not be able to grab hold with the tendrils. I’ll let you know if they do, though. 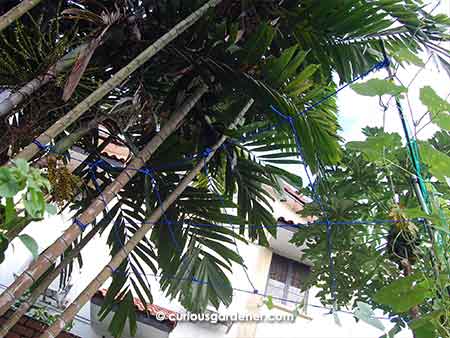 View from below of the new addition. It looks like part of an obstacle course, doesn’t it?

Another reason is that you can’t directly plant at the base of a clump of palm trees because of the dense rootball that all palm trees in my experience have. Any plant that grows beneath palm trees either has shallow roots or doesn’t grow into a strong plant. That’s why I planted the loofah plants away from the palm tree and have directed the vines to grow towards the tree. It’s the first time I’m trying this and I hope it works. Besides, this saved me the trouble of having to put up a second end of a trellis, which is not one of my favourite things to do.