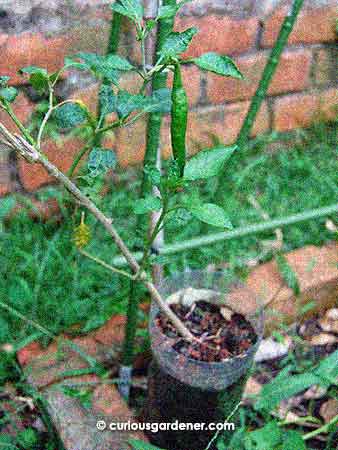 The latest chilli plant to bear fruit while growing in a recycled PET bottle.

After the first chilli plant growing in a recycled PET bottle surprised me with a fruit, I have been keeping an eye on the second plant to see if it would follow suit. Unlike the first plant that was quite scraggly, this one was a little more robust, and finally began to bud. Of the flowers that bloomed, one fruit has resulted, and is growing steadily. 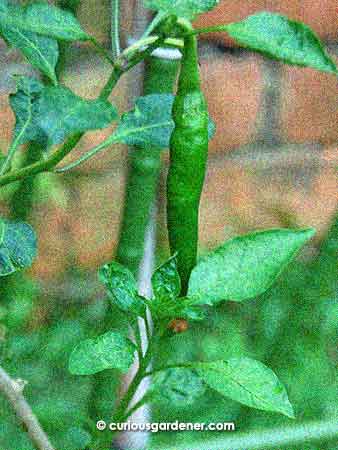 Just in case you couldn’t make out the chilli fruit in the first photo, here it is, closer up.

The hot weather we’ve been having due to the haze from up north has put more stress on the plants, and I’ve been trying to be more conscientious with watering the important plants. Since the the chilli plant is growing in a restricted sized pot that also has drainage holes, I’ve had to be extra careful with this plant. Even though I may water the plant heavily today, it will be pretty dry the next day, and if I forget to water it for two or more days, the plant will start wilting.

…and you know what they say about plants with wilting leaves – don’t use the sight of wilting leaves as the sign to water plants, because by then, the roots may be too dehydrated to recover.

So, because this is the dry monsoon season, and coupled with the haze that has raised temperatures, I’m doing my best to keep the plants – especially the fruiting ones – hydrated.

The nice thing is, you can grow productive plants in little containers. However, the first chilli plant that bore fruit has died out. I think the plants much prefer it when they have more space to spread out.

…like these two growing in a pot. I know it looks like just one plant, but there are two of them. One is in a small pot that I sat in the bigger pot that also had a chilli seedling in it. 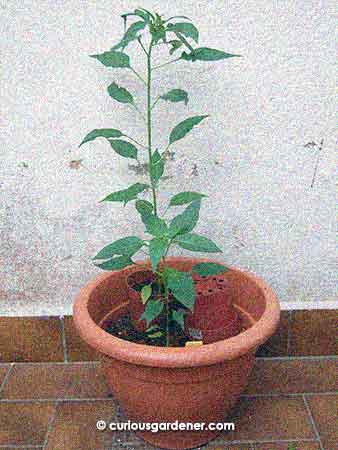 You may have to squint to tell from this photo, but there are two plants here. Interestingly enough, the bigger plant is growing in a small pot that the plant managed to sneak its roots out of, and is now rooted in the bigger pot. Both plants are the same age.

Oddly enough, the one in the small pot is the bigger of the two. It was planted at the same time as the one in the big pot, but grew faster in the smaller pot, then took root in the pot below and started growing like crazy. I don’t know why that always happens. Nevertheless, compared to the plants in the recycled PET bottles, this just shows how the size of the growing container affects the size and health of a plant. I am going to experiment further by planting one of these two directly in the ground to see just how much of a difference it makes!