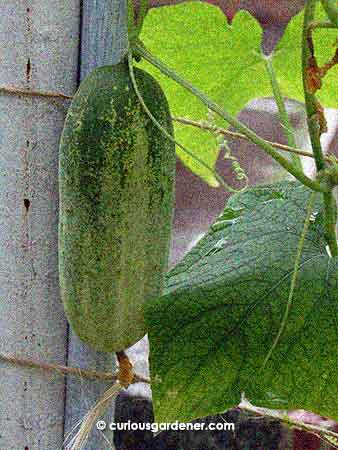 The short cucumber that is now our most-harvested fruit at the moment.

It seems that our garden harvest consists of lots of cucurbitaceae at the moment – cucurbita plants being gourds and squashes. Our biggest producers right now are the cucumber vines. There are just two plants, but they seem to be thriving mightily in the rainy weather we’re having. I’ve finally figured when to harvest them because I’ve become accustomed to their stout stature. 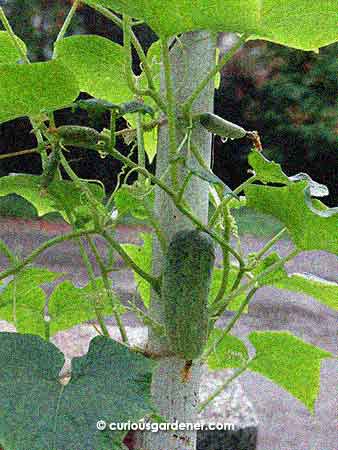 See all the fruits growing? Look above the half-grown cucumber along the white pole. Just imagine the whole plant with all these forming fruits!

Yes, like another productive cucurbita here, these cucumbers are short and squat. They appear to like the wet weather, because fewer fruits are aborting now, and the vines are happily spreading. It takes constant care to keep the plants trained onto their assigned trellises… 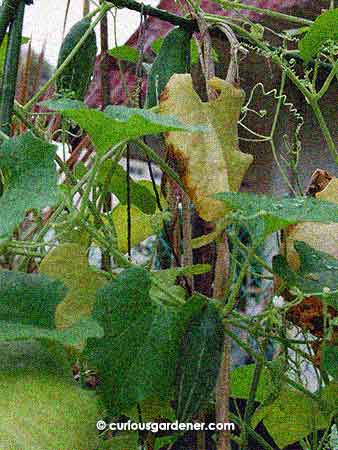 The mini snakegourds aren’t easy to photograph when you want to show them scattered around the trellis. However, there are three of them in this photo. Spot them? They’re still half-formed.

… just like my old disobedient plant, the mini green snakegourd. We have a single vine growing on an A-frame trellis, and it still keeps pushing the boundaries. I’m not allowing it a foothold on the fence out of respect for our neighbour, so it will have to resign itself to growing repeatedly over itself. With no help from us, it has been producing an increasing number of fruits. It is an Ol’ Faithful producer… 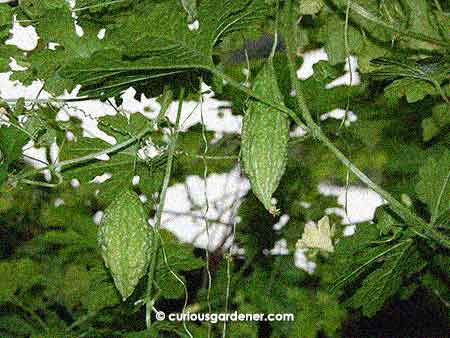 The small bittergourds remind me of christmas tree ornaments when they dangle like this!

Our mini bittergourd vine has been producing fruits, too, and we now have the new addition of a wild seedling that I discovered growing just under the mango tree. I guess I need to thank a bird for the new plant – that is how we first started growing the mini bittergourds, after all. 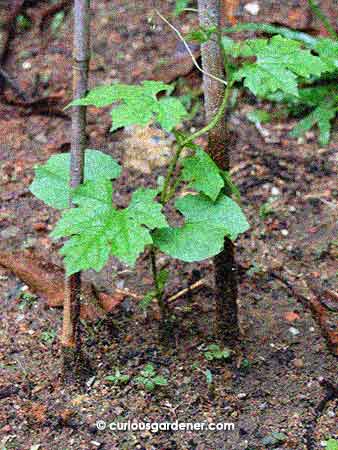 The new bittergourd plant. I’ve decided to leave it where it’s growing, and will probably have fun putting up one of my impromptu, add-on trellises for it to grow on.

The winter melon vines have also been popping several female flowers, but none have set fruit yet. The Weeds have been experiencing the same thing, but I think they have at least one fruit growing, unlike mine. I hope our plant decides to give us a surprise soon, and produces at least one fruit, too. (I mention this on the blog in the hope that it feels some shame and decides to do something about it – like the weather often does!) 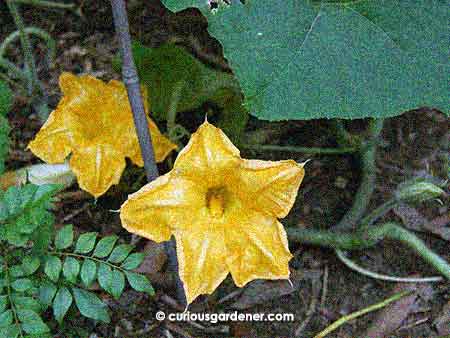 I was quite pleased when the butternut pumpkin plant put out not one, but TWO male flowers one day. They’re pretty, aren’t they?

The butternut pumpkin vine has also been displaying at least one male flower on a daily (nightly) basis. It has grown into a lovely big vine with thick stems and huge leaves. No sign of female flowers yet, but the vine is starting to branch out. I’m going to keep it constrained to the current area, though. I simply poke in short bamboo sticks next to the vine to lean it in the direction I want to go in. I’ve found this less traumatic to the plant than lifting and moving the vine, which puts leaves in an odd position when the vine is re-aligned. 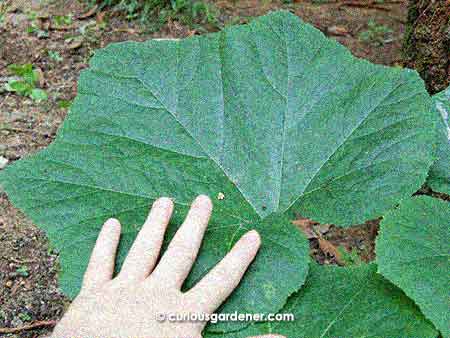 The size of the butternut pumpkin leaf has impressed me! I feel like I’m one step closer to Novice Gardener’s level of pumpkin growing now! 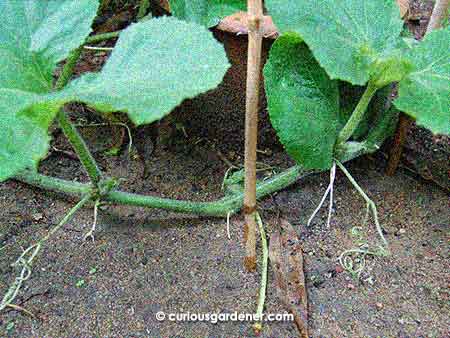 I’ve noticed that the newer section of the vine is putting out more roots – which is a good thing because the first 1-2 metres of it are now bare of leaves, and I’m afraid will die off.

For now, I’ll just say thank goodness for our cucurbitas. If not for them, we’d have hardly any fresh veggies to harvest right now. Let’s see if any of the other plants gets jealous and makes a stab for some blog-time…