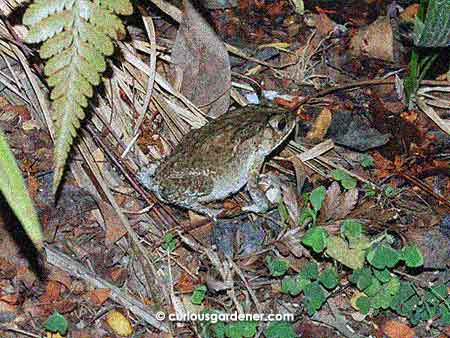 The Asian toad – also known generally as the common garden toad here – has been spotted in other areas of the garden, at night. It’s the first time we managed to get a photo of it.

I suppose to my readers who live in more rural areas that have local wildlife, this post would sound really silly, but having grown up in a country that has modernized a lot in the past half century, our local fauna has become so scarce that seeing something that used to be common in our, or our parents’, childhood is kind of a big deal.

In Singlish, the word for this would be “suaku” – ignorant or naive. After all, who gets excited about seeing a toad in the garden?

Well, considering that they used to be rampant so many years ago, then disappeared as the native countryside gave way to construction, seeing one again is like a jolt that evokes long-forgotten childhood memories…

…like just how numerous the toads were, that they were literally underfoot. Yes, they used to hop into the porch and house, and occasionally got stepped on. It’s not a nice sensation – they’re soft and squishy – and thankfully never were killed that way because once you felt that soft thing under your foot, you’d have a literal knee-jerk reaction to lift your foot.

It also used to be easy to find tadpoles – black ones for the toads and green-gray ones for frogs. Then the puddle-prone areas and streams gave way to our modern, effective drainage system, and then they lost that habitat, too.

So, seeing this regular garden toad is a good sign to me. I like knowing that the native fauna is still out there, but I have to wonder how this fellow and the Banded bull frog arrived in our garden. There’s no water to breed in, so they must have travelled quite a distance to get here.

This is not the first time we’ve seen the Asian toad (Bufo melanosticus) in recent times. It was first noticed earlier this year near the outdoor fish tank – but that’s covered and raised, so unfortunately the toad can’t gain access to the water – and spotted again a couple of months later inside the heliconia patch.

We finally managed to take its photo because it went hopping across the driveway, in front of the car. Armed with a torchlight and camera, Curious Mama and I finally succeeded in getting its picture, in all its warty, amphibian splendour. So now, I guess there’s one thing left to say: Welcome back, Asian toad, welcome back.