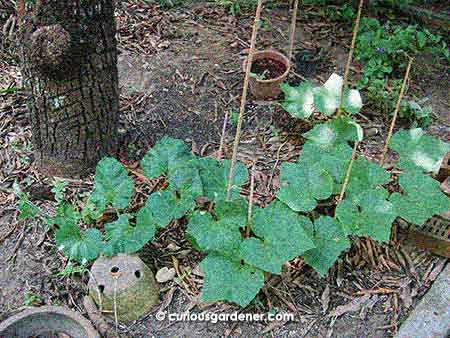 Our big butternut pumpkin vine spreading out under the mango tree, with the younger plant in the pot in the rear.

You’ve guessed it – it’s time to talk about the Butternut pumpkin plants. Thankfully, it’s not all mumbles and grumbles this time.

In case you’ve forgotten, we have two butternut plants right now. The first is quite matured, having been growing for a few months now. It had a shaky period where it had to adjust from growing well in a container to learning to grow in the ground in a completely different environment under our mango tree. I was interested to see that it took root at the part of the vine that was growing out when it was transplanted, and eventually discarded the length of vine that had grown in the pot.

That’s like throwing out the old and going with the new. Who’d think plants practised such psychology? 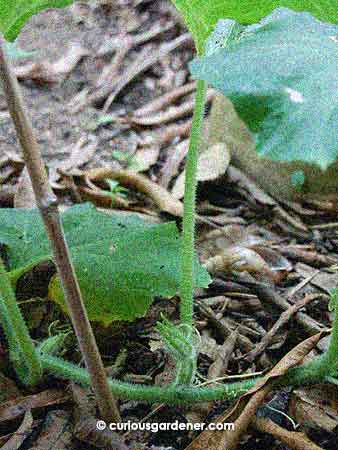 Finally, the vine has started putting out flower buds along the second half of the vine, at the leaf junctures.

Now that this vine has adjusted to the new place, it is growing faster and stronger, and is finally starting to bud. It is still creeping along the ground, and I’ve been poking bamboo sticks along the length of vine to try to protect it from people and creatures that don’t know it is supposed to be left alone. Who knows, maybe some of the tendrils that have been growing out may grab on and try to start the plant climbing.

In the meantime, the vine looks good – it’s at least finger-width at the moment!

Which is a good thing, because my small butternut plant that joined the butternut pumpkin patch-to-be – was not so lucky: 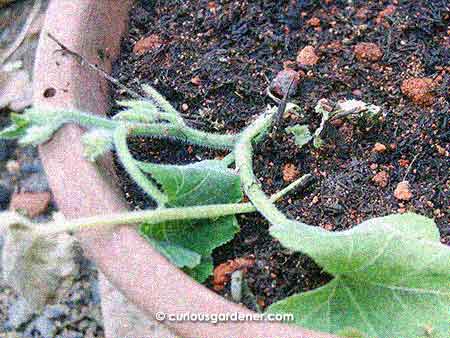 And here we have it: the baby butternut plant was neatly beheaded…

I suspect that a snail chomped through the juicy-looking stem, effectively beheading the poor plant.

Since the plant had good roots, I hope it can re-grow itself. And since I managed to do this once before with the Hami melon plant, I’ve stuck the severed part of the stem back into the soil in the hopes that it will grow new roots and eventually survive.

My lessons in all this:

Nevertheless, there is still the first plant, and a few more seeds to try planting. Cest la vie.