My first shark fin melon plant that was transplanted to a big pot has been growing quietly in its allocated spot next to the fence for a few weeks. Once I had decided on that spot, I simply watered it when it didn’t rain and gave it the occasional fertilizer. Apart from that, I haven’t been scrutinizing it much, and it has been expanding its territory bit by bit.

Since it’s nearing the time of month when our gardeners come to trim and prune, I had to check that the vine was not in a position where it could be mistaken for grass or a weed and be lopped off, and guess what I saw? 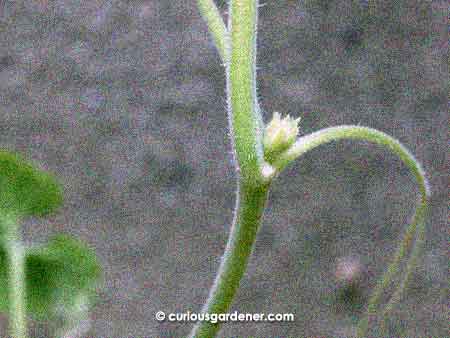 One of the four forming flower buds along the stem of the shark fin melon plant!

Flower buds – yes, plural – four of them are forming along the vine’s stem!

The vine itself is nearing 2 metres long, and despite having tendrils, has not attempted yet to climb upwards, despite growing along the base of a row of tall cordyline plants. It is still growing from a flower pot, and I haven’t seen new roots forming yet along the stem, so I will continue to water the roots when the soil in the pot looks dry.

If there’s one thing I don’t like to do, it’s to over-water plants when they don’t need it…

Yes, I know these first flowers will likely be boring male flowers, but it does mark a new stage for the vines. Since it’s another cucurbitaceae, I expect the flowers will also be yellow, but I will definitely celebrate the event when the flowers bloom.