Less than two weeks ago, I was admiring my purple brinjal plant, thinking about how long it has lasted. This plant was grown from seed early last year, so that makes it about a year and a half old. I had four of them that I placed in different locations in the garden – two in pots, and two in the ground – and this plant, grown in a pot, happened to take root at an awkward spot right in the middle of our front lawn! I left it there, though, and it is the proud survivor, still giving us regular, if smallish, fruits.

Well, when I was contemplating this plant about two weeks back, I decided to take a photo of it: 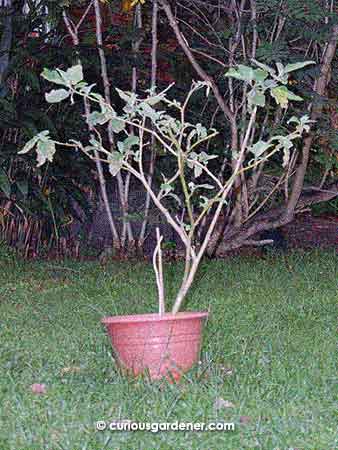 The brinjal plant about 2 weeks ago.

It’s not huge or impressive, but there were a few flowers that I had hoped would become fruits. Three of them did.

However, when I got home this evening, something about the plant caught my attention. It looked like it was dying, and I rushed over to look for the reason, fully expecting to see clusters of mealy bugs or white flies. Surprisingly, there were none. 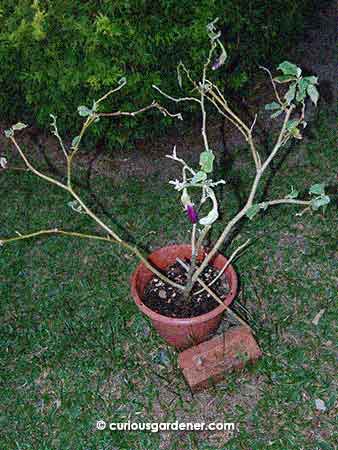 Stripped of almost all its leaves today…

However, what I thought was a dying leaf turned out to be… 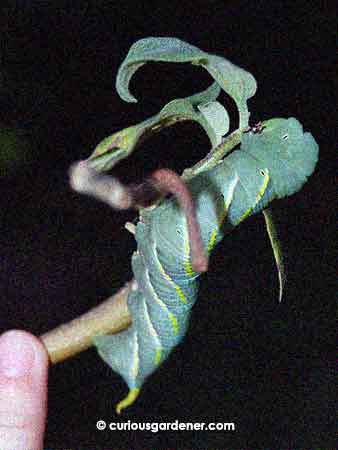 …a caterpillar! And a mighty fat one at that! It was even fatter than my index finger! (Not that my fingers are fat or skinny…)

As with the pink caterpillar of the other week, I was unable to bring myself to kill this caterpillar because it was rather pretty. Besides, it didn’t eat up most of the leaves out of vindictiveness – it was just following its nature, and who am I to begrudge that? I should have caught it at egg or an earlier instar stage. So, I relocated it to a less sensitive area, dumping it at the spider lily patch. If it’s smart, it will find a nice spot and make itself a cocoon. Good luck to it! 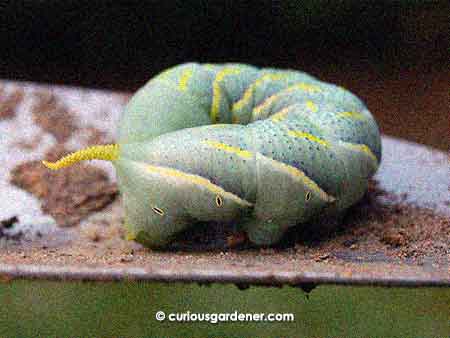 An even closer view showed that the “tail” on this caterpillar looked like it had grains of yellow pollen sticking to it. Sometimes, it’s interesting to simply admire the ingenuity of the different features of different creatures. If you know what I mean.