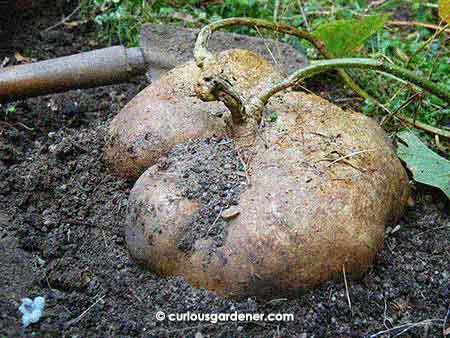 Mama Jicama partially revealed. I discovered how important it is to loosen all the earth around the tuber so that you can snip off the main tap root when you’re harvesting it …because when I pulled it out, part of the skin was ripped off from the bottom.

If you’ve been following my journey growing bangkwang or jicama, you should remember that I grew the very first plant from a baby bangkwang bought from the market because it still had a green leaf attached to its stem when I saw it. That plant grew and flowered, yielding seeds that I began new plants from. I eventually focused too much on the second generation and forgot about the alpha, or Mama Jicama (because it spawned more plants), until it reasserted itself and caught my attention again.

So, I’ve been watching and waiting for about four months, and I finally couldn’t stand it – I decided it was time for Mama Jicama to get out and say hello to the world. So, this evening, I went about the enjoyable task of harvesting the biggest jicama grown in our garden. I had to chuckle, though, as Mama J revealed what looked suspiciously like childbearing hips – or simply, one huge butt! It was a very impressive huge butt, though, weighing in at close to four pounds, or almost 1.8kg! 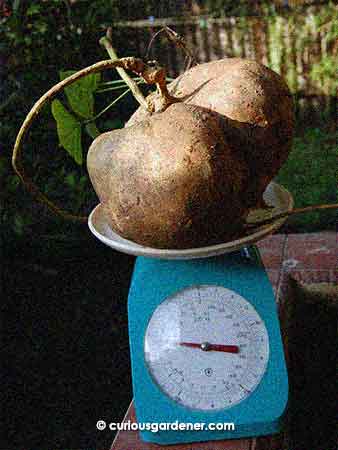 And it weighs in at an impressive 1.78kg!

Before I pat myself too hard on the back, though, I have to remind myself that this harvested fruit was grown from an actual fruit (so it had an unfair headstart), and it’s been over two years in the making. But it’s so darned impressive!!! 8D

So, world, meet Mama Jicama. Well, she’s technically a grandma now, since we’ve grown two more generations from her seeds. Her progeny should be quaking in their roots because she’s one tough act to follow!