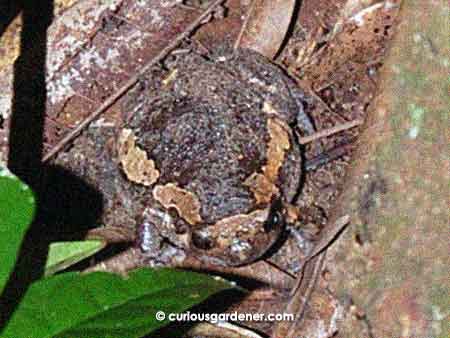 What an odd face the Banded Bull Frog has! And a fat body. Doesn’t it blend in well with its surroundings?

I’ve given up on growing sweet potatoes. Yes, we’ve harvested leaves to eat, but in the case of potatoes, there have been none for harvesting. So, I started reclaiming the space occupied by the sweet potato plants in our back garden. It’s one of the few places that our gardeners accommodated our edible plants by not cutting …much.

Because of this, the area has become a little wild. It’s partly shaded by a mango tree and flanked on two sides by a drain, and another by the fence. It was the perfect isolated space to grow the rampant sweet potato plants. Of course, this meant that any other seeds that landed there also had free rein to grow – and some grass and weeds did. Leaves from the mango tree also remained where they fell, and eventually a good layer of leaf litter built up, creating a nice haven for worms, beetles, snails and other decomposers to breed in – which in turn attracted their predators in the form of various birds and the ever-present Oriental garden lizards.

Truth be told, I was a little sad to break up that ecosystem when I started removing the sweet potato vines, but this is Singapore and real estate is precious and not to be wasted. Insects flew up in agitation and the garden lizards went scuttling as I went to work late one evening. It’s been hot, so I like to do my gardening in the evenings when it gets cooler. It was also somewhat shady under the mango tree, but not dark enough for me to miss the movement of something different.

Fortunately we’re not talking about slithery movement, although I do have my eyes peeled for snakes in the more overgrown areas of the garden. After all, we have seen these reptiles on occasion, and I’m not keen on making close acquaintance with them.

What caught my eye was an amphibian moving cautiously away as I cleared the area near the base of the mango tree. I was thrilled, because it’s been a really long time since we’ve seen frogs and toads here, and I ran off to get the camera at once. I thought it was the toad that I’ve seen only twice in the last year. It’s been very camera-shy, which is why I haven’t mentioned it here until now. 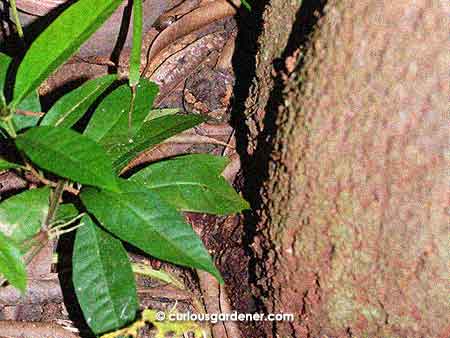 Can you spot the bull frog? It stands out, sort of, with the flash, but was so difficult to locate initially in the shaded lighting.

When I returned with the camera, the creature had disappeared. I looked from a distance, then moved in closer, but still couldn’t see it. However, when I began moving leaves to look, it moved again, and that’s when I understood why it was so difficult to spot it – it wasn’t a regular toad, and it blended in really well with the ground! It was a similar shade of brown to the fallen leaves and earth, with patchy light brown stripes along both sides.

It was also the oddest amphibian I had ever seen in our garden. Yes, it had the usual number of legs in all the right places, but it was unusually wide and fat, making me wonder if it had bloated itself up, as some frogs do to scare away predators. In contrast to the rest of the body, the head seemed unusually small. It also seemed to have a short little snout, reminding me of a pig. As I said, it was the oddest thing.

The next step involved online research to identify it, and Wildlife Singapore gave me the answer:

It was a Banded Bull Frog (Kaloula pulchra), also known as the Asian Painted Frog, or Bubble or Chubby Frog. Interestingly, it is apparently a native creature in our region of the world, but I guess disappeared from our neighbourhood as it got more built up and they didn’t have many places to breed. I do remember my dad talking in the past about bull frogs, but the only amphibians I remember seeing in our garden were toads. 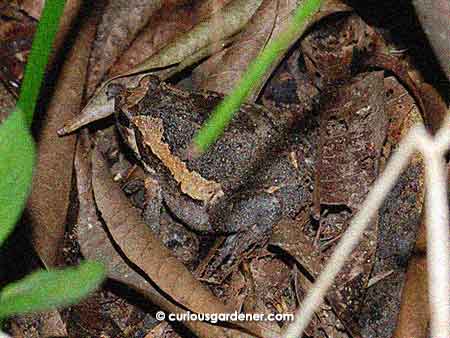 Aerial view of the back/side of the Asian Painted Frog. Such effective camouflage!

It appears that the wild state of our back garden is the environment it lives in, if “forest floor” means to be shaded and covered with low-growing plants and decomposing leaves. They hide under the leaf litter during the day, then come out to hunt at night. There is no water to be had, though, unless you count falling rain and water running through the drain on rainy days.

The bull frogs are supposedly able to weather dry periods by burying themselves in the ground until it rains, but I doubt they need to do that much since it rains here fairly often. It would be an interesting experience, though, to unearth one of these while digging in the garden – and I don’t mean in a pleasant way…

Do I want more of these creatures in our garden? Not necessarily. They can reportedly be an invasive species, and I think the one lurking at the back may not remain once I finish clearing away the weeds and sweet potato vines. It was interesting to see, and will go on our list of unusual garden visitors along with the Blue-winged pitta and vulturine guineafowl.