I love observing how plants react to changes in their environment. Just last week, I decided to move my winter melon plant from a rather shaded location where it had been independently weaving its way up the neighbouring plants. I also decided to remove it from growing in a pot, and transplanted it to the ground so it could grow on a bigger trellis. 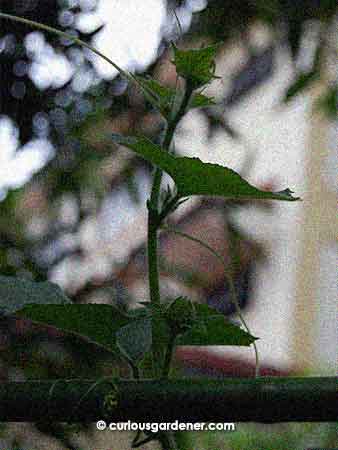 It can’t go up so it decided to start putting out flowers. The first male flower budded at the level of the horizontal bar, with more showing at each subsequent leaf joint.

The thing is, the vine was already rather long, at about three metres, and instead of having to grow and climb its way up, it was long enough to be draped over the top of the trellis and stretched across the horizontal supports. I had to do a little creative winding of the stem around some of the supports, and encourage the tendrils to hold on to the new trellis. 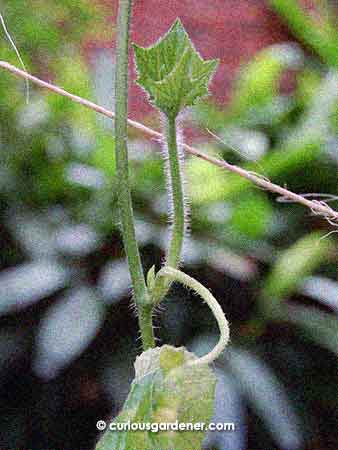 The new offshoot growing along the main stem. This means we’re going to have a more lush plant than the first!

It took about three days for the plant to settle in, during which it shed some of the older leaves that were also covered with some powdery mildew, and secured tendrils without further help from me.

I also noticed the apex of the vine getting its spacial orientation. It wanted to grow upwards, but as it is in the middle of the horizontal section of the trellis and there is nothing to climb up onto, it seemed to pause for thought. Now, it appears that it has decided it’s time to start budding.

I don’t know how plants instinctively know when to do what, but I love observing how they behave so that I will be able to have more success with the following generations.

The plant has also decided that the main stem is too bare after shedding the older leaves, and has started growing a new offshoot near the top of the vertical part of the main stem. This gives me hope that this plant will be stronger than my first one that grew just the one main stem and single fruit before dying off. 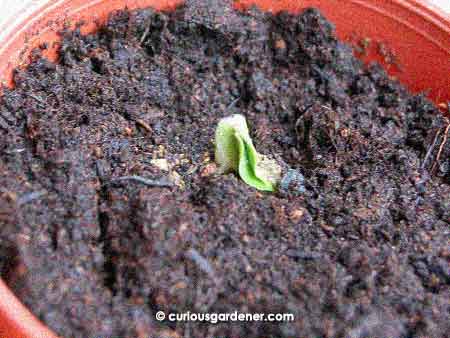 Generation 2A – one of the new sprouts grown from seeds harvested from our first (and only) home-grown winter melon. The first Gen2 plant is the transplanted vine mentioned in this post.

To be safe (and typically Singaporean kiasu), I have started a few more new plants from the seeds of our harvested fruit. Five months later, they are still very viable, germinating within just three days. I hope I have learnt enough to nurture these vines into being as fruitful as possible!