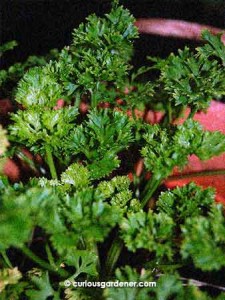 Herbs tend to grow well in containers. Unfortunately I don’t grow herbs well. This pot of parsley was one of my rare successes.

When it comes to planting edible plants, I’ve been a fan of growing them in the ground – my reasoning being that when you give a plant more space to grow, it will be happier and more productive in good earth. This has definitely worked for some plants, yet, not all. I would have considered the failures as experiments gone bad, except for the fact that some of the very same plants have done well in other gardens in Singapore, and grown in containers.

Take the winter melon plant as an example. I cleared a patch of lawn and thought I did a decent job fertilizing the soil before planting my first winter melon plant. It grew and bore one harvestable fruit before it slowly died off. The Weeds, on the other hand, grew their winter melon plant in a container, and at last count, have grown two fruits – although the first was smaller than ours.

I thought I’d try keeping the next plant in a pot, just to compare against our first plant. This time, I also added a lot of aged compost and have it in a more shaded location at the moment. These seem to agree with the plant, because it has been growing quite rapidly and looks nice and healthy.

However, I’ve since seen the post on Chawanmushi’s blog that mentions the 20KG winter melon that they harvested at their community garden, and to say that I’m green with envy barely begins to express the depth of my awe of the fruit!

Correct me if I’m wrong, Chawan, but I believe the winter melon plants were grown in the ground. It makes sense that when a plant is able to grow a complex root system in good earth, it will be able to produce good-sized fruits.

Half of that theory is true with my snake gourd plant. That vine is extensive! I’ve already complained about it in a previous post. And just look at the main stem of the plant: 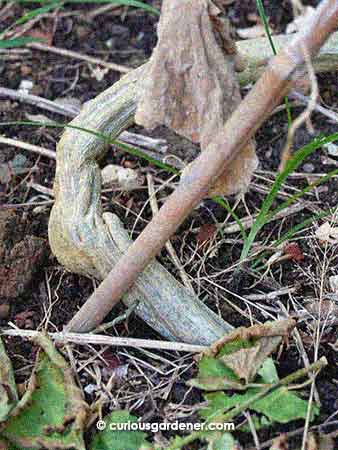 The stem of the snake gourd vine is thicker than a thin bamboo stick, and the thick vine goes all the way to the top of the trellis. No wonder the vine is able to spread so much!

It’s thick and woody, and growing in a bed that I had taken time to make and “bake” more than a week beforehand with mature compost, volcanic soil, blood and bone meal, and some chicken dung. If I had done this even earlier, it probably would have been even more fertile, but over here, weeds sprout up in no time, so that was as long as I was willing to let the bed sit unoccupied for. I can only assume that the soil has been improving as the vine has grown, based on its enthusiastic growth.

So, coming back to the topic of this post – I think container gardening has its perks in that you have more immediate control of the plant’s growing media and rate of growth, and you can utilize area much better. I think container gardeners would be able to grow four to five different plants in the amount of space my snake gourd vine now occupies…

I’m still not entirely sold on the idea of growing some fruiting plants in pots, though. 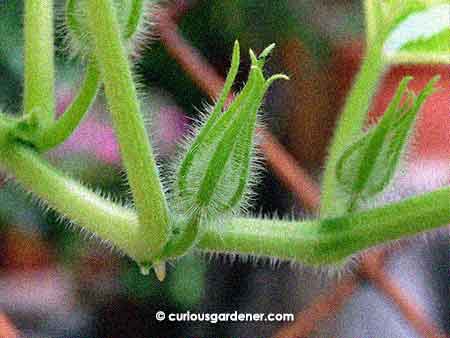 The butternut pumpkin vine starting to root along the stem!

Some, of course, don’t need lots of space to grow in, so I would put them in pots – plants like cucumbers and long beans, for example.

Vining fruiting plants like winter melon and the winged bean can grow to over 6 metres, and accordingly need to be able to grow extensive roots to feed themselves. I haven’t tested growing them in containers yet, but think they could do well in large containers. I’m keeping my mind open on that. After all, our first bittergourd plant that sprouted wild grew relatively well in a large dragon jar/pot. 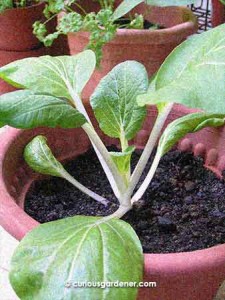 An unexpected success for me – the white pakchoi grew to a decent size and age! Pity I didn’t take a photo when it was bigger than this…

Other plants that I think absolutely have to be planted out are those with meandering habits, like pumpkins and sweet potatoes. They take root along their stems, which helps to strengthen the plants. I used to think they sprouted from a single source and that the fruits like the sweet potatoes would originate at the source. Oh, was I wrong! Maybe the plants needed time to mature before they could start developing the tubers, because I found baby sweet potatoes somewhere in the middle of the stem when I was pulling out the sweet potato patch last year. It’s still a learning experience for me…

Vegetables we have grown successfully in containers include herbs (of course) and leafy veggies like kangkong and pakchoi. We will continue with this formula – although, to be a little perverse, I am going to try growing leafy veggies out in the garden just to see which pests will annoy them so I will know for sure. After all, there are more than enough seeds to spare in each packet of seeds we buy!

I don’t know about you, but I like that while I have been growing veggies somewhat seriously for over two years now, there is still more to learn with each new growing season. That new understanding should help me improve on the next crop, and isn’t that what gardening should be about?