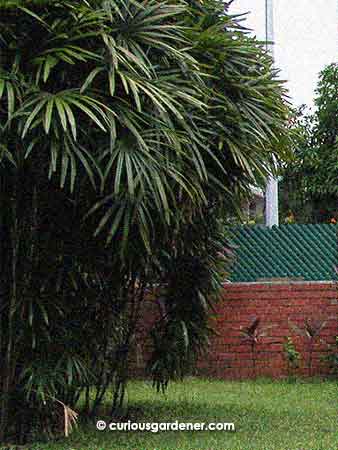 What happens when a plant has no confines – it covers more ground and grows as big as possible – our wild raphis in its heyday.

We used to have a pot of the raphis palm plant that my dad decided to plant in the garden. As most plants do when set free, the plant multiplied and grew into a huge clump that was easily over 3 metres tall. It was dense and became a nesting place for different birds, but was difficult to maintain because of the tough cane stems and hard, fibrous roots. And, it spread quite rapidly by runners that tangled with each other over time. We finally called it quits and had the plants removed, keeping one small pot once again.

I noticed recently that the plants in the pot had become smaller and thinner – a sure sign that the plant was root bound. Indeed, the raphis had been trying to break free of the confines of the pot, cracking it. Luckily, it was a plastic pot, albeit a tough one, but it appeared it was past time to split and re-pot the plants.

Getting the plants out of the pot was a huge struggle. With normal plants, you can simply slip a spade along the inside of the pot and wiggle it to loosen the plant roots. This, however, was an unusual situation. When I got tired of attacking the inside of the pot, I tipped the whole plant on its side to prepare to tug it out. Not the most advisable thing to do because it can traumatize the plant, but desperate times called for desperate measures. 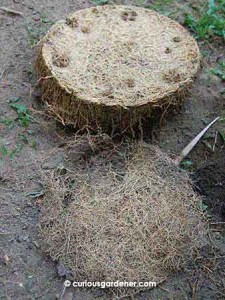 Above, the matted roots from the lower part of the pot; below, the mat of roots that had been growing on the exterior of the bottom of the pot. That’s what I call root bound!

That was when I saw that the roots of the raphis had been growing on the exterior of the bottom of the pot – so neatly that they did not show beyond the edge of the pot! I cut that away and was left with a round mat of roots. Only after this was I able to extract the plant from the pot.

There was a thick mass of pot-shaped roots at the base of the plants. With soft-stemmed plants like mint, you would cut away about half the height of the roots before splitting the plant and re-potting it. With the troublesome raphis, I cut away about a third of the height because the roots were that tough, then split and then trimmed away more height and dead roots.

The plants have been split into four. We’ll definitely continue to keep them because we like their foliage. What I won’t do, however, is wait quite so long before splitting them again. The plants that I just split had been unattended for about 8 years!

So, if you notice your potted plants getting smaller and thinner despite fertilizing them, know that it’s a sign that you need to split them up. Cutting away the lower part of the matted roots is alright because plants are naturally hardy and will always strive to stay alive.