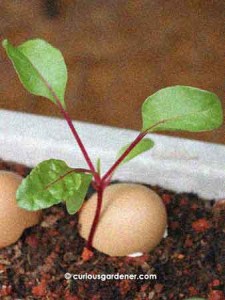 The young beet plant being held upright by an accommodating egg shell!

I’m growing beets for the first time, thanks to The Weed, who shared some seeds with me. They were the oddest seeds I’d ever seen – none of them the same, each looking dry and extremely bumpy! And then I discovered that those were actually dried fruits, essentially several seeds in a cluster. That explained why beets need to be thinned out as they grow…

Prior to this, I’d never considered growing beet root. Firstly, I have it in my head that they aren’t tropical fruits… er, roots… and secondly, I have never eaten beets before and don’t know if I’ll like them. But the overriding factor in growing them now is that I can’t resist the challenge of trying to grow something edible from seed.

So, I planted three seeds in late March. It seemed safe to start sowing new plants then, because the dry monsoon period seemed to be over, and we were getting more moisture and fewer plants were wilting. 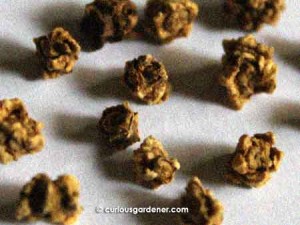 The seeds germinated, and grew in three clusters in the little pot. They seemed to stay at the seed leaf stage for quite a while, so I decided I would transplant them then. I prepared a planting trough – filled with a mix of organic compost, burnt earth, coffee grounds and volcanic soil – a few days prior to the transplant. In organic gardening, it’s suggested that you let the soil settle and rest before you start planting in it. I’m usually too impatient for this, though. Besides, weeds start growing anywhere they find available conditions. I’m not giving them an open invitation in good soil!

When the time to transplant the seedlings came, I found that they separated quite easily, so instead of growing three clusters that I would have to thin out later, I had about nine seedlings to play with! Of course, this posed a little problem, as I had to plant the seedlings closer together than planned. I guesstimated the size they could grow to, then positioned the seedlings in a staggered pattern in the planter.

I also decided to plant the seedlings a little deeper to give their stems more support – and because the photos I’d seen of them growing showed the cluster of leaves sticking out of the soil, with no sign of a stem. I did that, but a few of the seedlings didn’t seem to appreciate it and grew their stems a bit more anyway. Of course, they then became rather top-heavy as the true leaves grew, and have been leaning over every which way when they’re watered or when the wind blows. I had some washed egg shells that I was going to use as fertilizer out in the garden, but decided to use them to prop up the leaning beet plants first. They seem to be doing the job well, and a few of the young plants are starting to stand up on their own again. I still think I’ll top up the soil level a bit so it’s closer to where the leaves branch out. 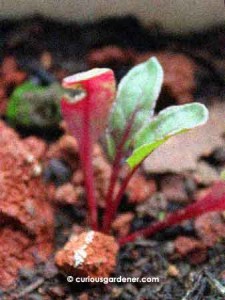 This plant broke off along the stem when it had the first two true leaves coming out. Instead of discarding it, I poked it back, and am amazed it still seems to be growing!

On the not-so-good side of things, a couple of the seedlings leaned over so much that they got a kink in their stems, and eventually broke off at the bend. I was upset about the first one and tossed it out into the garden, but for the second, I poked it back into the soil to see what it would do. Would you believe it seems to be still growing after almost a week? At least, the leaves aren’t dying …yet. I don’t know about you, but I just have fun with these little experiments!

Another couple of seedlings died from dehydration. The planter is in a sunny location, and all it took was a single, hot afternoon with not enough water to kill the seedlings. I wish I had realized just how hot that spot was before I left the newly transplanted seedlings there. I shifted it for a few days to give the seedlings a chance to establish themselves before putting it back – and I’m being more careful to water them more frequently, especially on hot days. Thank goodness the others recovered and are still growing, but we’re now down to six plants.

I believe I read that it takes 60 days for beets to mature, so the lull begins now. I hope the plants just keep growing as they should and no calamities happen to them.