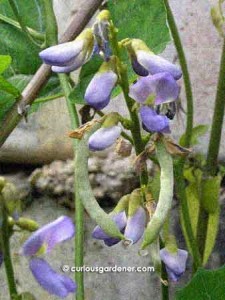 I think jicama flowers are among the prettiest I've had growing here. They are pictured with some developing bean pods.

Let’s take a walk down memory lane, of two years or so back. I wanted to try growing jicama or bangkwang plants, and started that venture by planting a baby jicama I’d seen at the market that had a bit of stem and leaf attached to the tuber. That started growing, and eventually flowered and provided me with seeds to start new plants with.

We’ve already harvested one of those grown-from-seed plants, and are waiting for the rest to grow bigger.

What I had forgotten about was the mama plant, which was growing along a wall that gets mostly afternoon sunlight. That was my initial edible garden, but has since made way for the Red Lady papaya trees. All I have left along that stretch are edible ginger plants interspersed with lemongrass and a few ornamental plants. The jicama was completely forgotten.

Then, last week, I noticed a plant twining itself up a dead cosmos plant. I recognized the leaves as those of the jicama, and traced the stem down and through the grass and weeds to the source. Imagine my surprise at seeing… 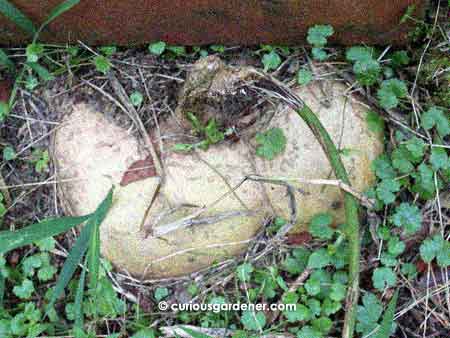 Peeping through the earth and weeds was the biggest jicama we've seen growing in our garden!

…the mother of all jicamas – literally!

This mama, although only the top is showing, looks much bigger than the first harvested jicama. If I were to guesstimate, I’d say it’s almost 20cm across and probably 10cm high. That’s pure guesswork, mind you. However, from what we can see from its top, it seems to be slightly bigger than the jicamas sold commercially. That would make those commercial ones between one to two years old. Wow.

Do I want to harvest this mama plant yet? I’m tempted, because it looks huge!

This is the lazy way of germinating seeds, but it's also cool because you can see how they germinate!

Considering how long it takes to grow a decent-sized jicama, I decided to plant even more seeds. These plants usually produce a lot of pods, but I normally remove them so that the plants channel their energy into developing the edible tuber. The pods also take quite a while to mature, so I only allow one or two to develop at a time, if at all.

So, when our gardeners did their usual thing of accidentally severing the stem of the jicama plant I had been saving my pods on, I was really upset.

Okay, I can’t blame them too much because I’m lousy at weeding. I only remember to go weed around the important plants towards the end of the month because I know they’ll be coming soon.

It’s a mighty good thing this plant is so tenacious. It just keeps growing a new stem and leaves, and troops on. Gotta love it.

So my seed pods weren’t able to grow to full maturity, but they dried out and I decided to take a look at the seeds inside. You never know if they’d be ready or not, right? On splitting the pods open, I found that not all the seeds had grown very big. Crossing my fingers, I selected the biggest ones and buried them in a cup to hopefully germinate. Less than a week later, I saw tap roots beginning to show! So, the next generation of jicama is underway; it will just be a long time before we see results.

I think we’ll leave the mama jicama alone and see how much bigger it can grow.