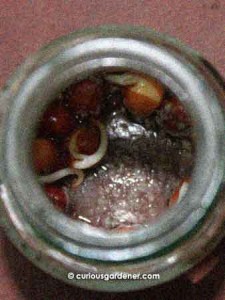 Sweet pea seeds germinating after being soaked in an enclosed bottle for about 3 days.

As mentioned about 2 months ago, I started growing a few sweet pea plants, not knowing how they would fare in our hotter, more humid climate. I know they’re supposed to like a cooler environment to grow in. However, since they sprouted and grew quite well in their little pots prior to transplanting, I decided to go all out and try to make the most of the cooler year-end weather here.

Just to jazz things up for myself, I tried a different method for germinating the second lot of seeds. I tossed a handful into a small bottle, added a bit of water – about a fifth of the height of the seeds – and capped the bottle tightly. The bottle was rocked gently a few times a day to try to keep as much of the seed surfaces damp – it was also my excuse to peek at them to see if they were germinating yet – and kept on a relatively dark shelf when not in my hand. 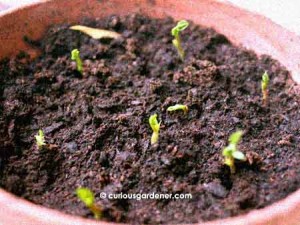 By the third day, the seeds had noticeably swelled, and the outer skins began to split open as they germinated, like a proper science project. I waited for most of them to grow out their roots before transplanting them to a Tref-filled pot for the next stage of their growth. Once they had grown their first set of true leaves, they were transferred to their spanking-new trellis complete with a growing bed.

Yes, I have been busy with these projects lately…

The first lot of germinated plants were already growing at the trellis, and I was anticipating seeing all the plants growing and covering the entire A-frame trellis with lush, dense growth. 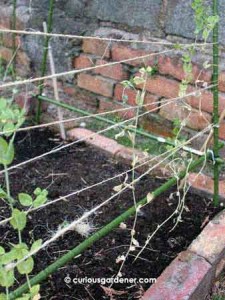 After an initial good start, the sweet pea plants began to die out one by one...

Imagination and reality, however, didn’t coincide. The weather patterns changed after the new year, and the dry monsoon period kicked in. One by one, the little sweet pea plants began to wither away despite constant watering, and we went from 14 plants to 6. They didn’t grow all that rapidly, even with watering and fertilizing, and I began to resign myself to seeing all the plants die off. I even put in a young angled loofah plant at the other end of the trellis because I expected the sweet pea plants to fail.

Fast forward to this week and what do you know? The first flower bloomed! It was a pretty pale pink bonnet-like flower shyly facing downwards. The following day, it bloomed fully with the outer petals curled backwards to reveal deep pink petals inside! I had heard that the flowers were pretty, and was definitely not disappointed. 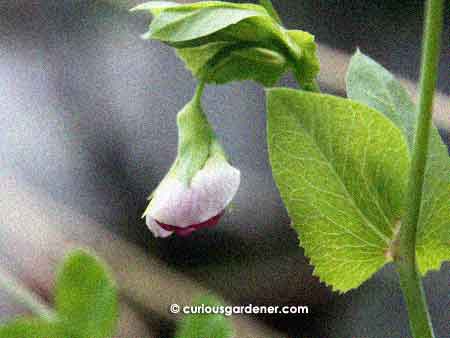 The first flower as I saw it on the first day 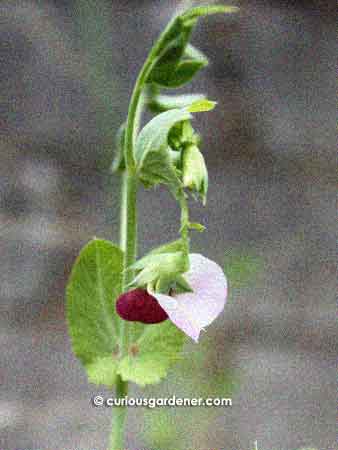 The fully opened sweet pea flower on the following day. Also notice the forming bud just above it!

To make things even better, I noticed another flower bud on the neighbouring plant, as well as a second bud above the first flower! Well, I don’t know if we’ll get any harvestable peas, but those flowers sure are pretty! Stay tuned for more updates…