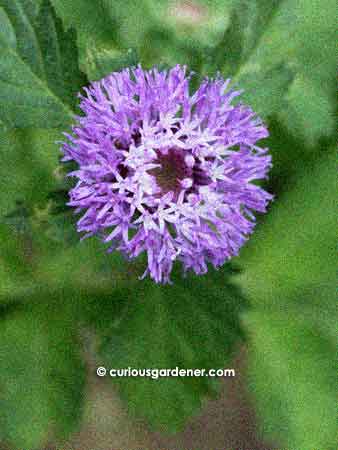 About a year ago, I visited Kampong Buangkok – the last village on mainland Singapore – and one of the things that caught my gardener’s eye was a plant with light purple flowers growing somewhere along the edge of the village. I tried to get a photo of it with my phone camera, but it didn’t come out too well.

I guess I was fated to get acquainted with the plant after all, because a friend gave me cuttings of a plant from her garden, assuring me that it bore really sweet flowers that the bees loved. Well, you know me and my penchant for growing new plants – especially potential pollinator attractors – I accepted the cuttings and once they took, planted them out in the garden.

At that point, all I could tell was that the plant had nice strong succulent-looking stems, and leaves with interestingly serrated edges that smelled a little like pineapple when bruised. It took forever for the plant to establish itself, but when it did, it began to spread with a vengeance. Very soon, there was a nice little bush that began to bear alpine-like (to tropical little me) flower buds that reminded me of acorns. 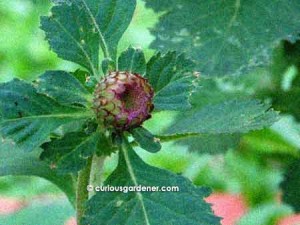 The first flowers bloomed, revealing themselves as little lilac pompoms, to my delight. Close examination of fully bloomed flowers showed that the reason they resembled pompoms was because they were actually composite flowers with darker lilac flowers along the outer ring, and white or very pale lilac flowers near the centre.

Now that the plant had flowered, I was able to identify it as the Brazilian Bachelor’s Button or centratherum intermedium. It was only later that I identified it as the plant I had noticed at Kampong Buangkok, and what a coincidence that was!

One thing about the plant is, it tends to spread out quite rapidly. Now I understand why my friend had so many cuttings to give away! What remains to be seen is how well it can fit in with the rest of the garden and hopefully not become a nuisance plant. 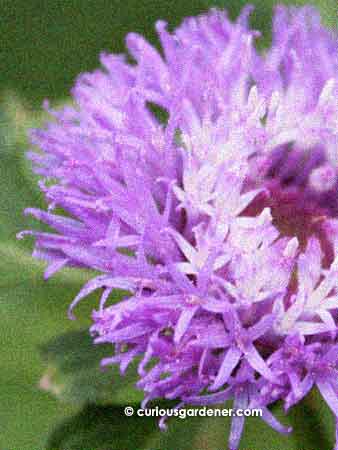 Close up view of the Brazilian bachelor's button flower.