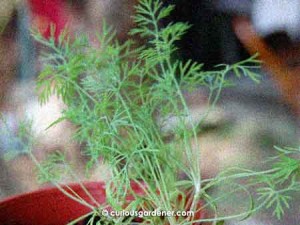 I have such a poor track record growing herbs, but it doesn’t stop me from trying anyway. Recently, I was lured into buying a packet of dill seeds, because I wanted to know if it could grow here. Well, it can, and the seeds germinated fairly easily.

Oddly enough, around that same time, a family friend brought some cuttings of dill from her garden, where it apparently grows profusely. They were nice, thick-stemmed cuttings, and I rooted them in water first, as the weather at that time was rather hot and dry. They were so healthy looking that I didn’t want to risk their dying. The roots grew nicely within a week, and I potted the plants and was satisfied to see them grow steadily. 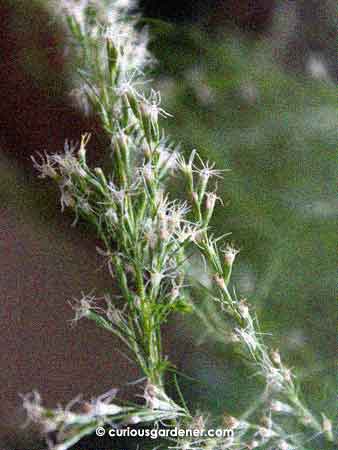 Fluffy-looking clusters of tiny flowers on the dill plant.

In the meantime, the plants grown from seed were growing quite well. In fact, they grew quite well for about two months before they died off. Like I’ve said, I’m herb-challenged.

Luckily enough, the dill cuttings kept growing well. The over-30cm cutting I had planted in a pot quickly grew and became root-bound, and just a couple of weeks ago, I was surprised to notice little off-white flowers blooming. They’re very sweet, fluffy clusters along the top 15cm or so of the plant. I’m letting them finish blooming just to try and get seeds. Yes, I know it’s probably child’s play to do this, but we’re talking about herbs and me – not a great combination…

I shall have to decide where to place the biggest plant, since dill is a perennial and a beneficial insect attractor. An added bonus is that dill can also add to the visual aesthetics of the garden, with its feathery fronds. What remains to be seen is how the insects react to it and whether it will become a pest magnet, as has happened in the past. Just staying realistic…