We’ve had a preview of a white Christmas and it’s no thanks to mealy bugs. They took over one of our roselle plants… 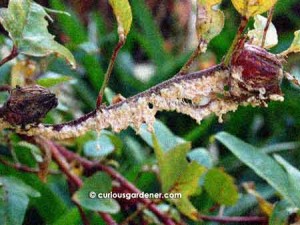 … and are trying for dominance with the papaya trees as well. 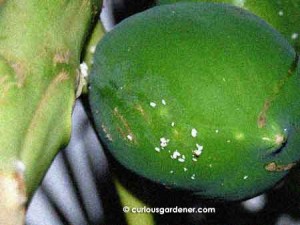 This is how it starts - a few white blobs here and there, and if you don't do something about it, they will cover everything!

They’ve also been trying to populate the aubergine plants, but I’ve managed to control that with regular squishing so far. 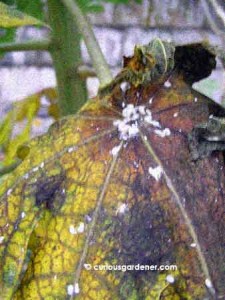 This is a mealy bug infestation at its worst on a papaya leaf - the underside of the leaf is covered with white mealy bugs (not in view) and the black mildew has worked its way through the leaf, killing it slowly but surely.

No thanks to the rainy weather, I’ve been unable to check the troops as frequently, so the mealies had a nice head start. The most infested roselle plant had to go, because I didn’t want the bugs spreading to other plants.

Worse, the papaya trees were so infested that black mildew, which is a side effect of mealy bug  infestations, had spread to many leaves. I had a very bad experience with mealybugs and black mildew with the first of the Red Lady papaya trees a year ago. The infestation was so advanced that I had to get rid of the entire tree because at that time I hadn’t known about mealy bugs and what they can do. This time, I pruned and disposed of the diseased leaves immediately, leaving two of the trees looking awkwardly tall and naked. More disappointingly, I decided to sacrifice several fruits that were covered with horrible white mealy bugs. The less infected leaves got a good spraying of white oil, that I hope will control the rest of the mealy bug  population.

I don’t like this tropical version of a white Christmas!