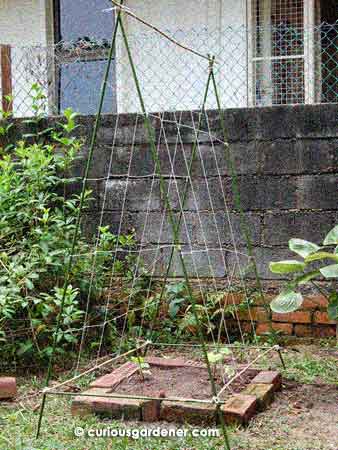 My latest take on the A-frame trellis.

Growing the winter melon plant for the first time, I have no idea what to expect of it, but I figured I couldn’t go wrong with an A-frame trellis.

I was running a little low on building materials at that time, so this trellis ended up being a shorter one, at about 1.7 metres high, since those were the longest poles I had on hand then.

Once again, the ‘A’ was made of the thin metal poles. Since I was short on metal poles then, I used bamboo sticks for the horizontal supports – one across the top, and one near the base on each side.

I also used my trusty cable ties to keep everything tightly secured, but also tied the joints with white twine.

Next, because I didn’t have more poles, I decided to use the white twine to create grids for the plants to attach themselves to. As the winter melon plant is a climbing plant, I wanted to have smaller grids for it to reach out and attach to. So – this is where my fun began – I decided to make the grids out of twine.

I started with the vertical bits first, tying one end of the twine to the bottom horizontal bar and looping it around the top bar before tying it off to the other bottom horizontal bar. I did it this way because I wanted to minimize the number of strings and knots I would have to tie. It was also much easier and neater to do.

One thing to note is that it’s important to pull the twine taut before tying it off, otherwise it will sag later under the weight of the plants. Been there, done that, and it wasn’t pretty. 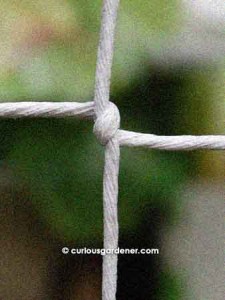 The way the horizontal twine loops around the vertical twine.

After completing a set of vertical strings, it was time to do the horizontal ones. These were a little more fun to do because after tying it off on one side, I looped it around each vertical string as I stretched it to the other side. Looping it would give more support rather than just stretching the string across from one side to the other. Again, I pulled the twine tight before tying it up. Soon, I ended up with a grid that was similar to a football goal! It is of course your choice how to space the grids. I experimented with squares on one side and rectangles on the other by decreasing the number of horizontal strings.

One drawback about using twine is that it will disintegrate within 6 to 12 months when left out in the elements. Our heat and rain speeds up the decay process, and I noted that twine would only be suitable for one or two growing seasons at most – that’s less than 12 months.

A good thing about making a smaller trellis was that I didn’t have to construct it on site. I made the ‘A’ sides first, then attached the top horizontal pole – which sort of held them together in a wobbly way – before attaching the lower horizontal poles. It was admittedly still a bit wonky when I completed the construction, but once I anchored the legs by burying them a bit and adding stones around them, the trellis stood sturdily enough. Whether the A-frame is suitable for winter melon plants remains to be seen, but I’m always game for a challenge.