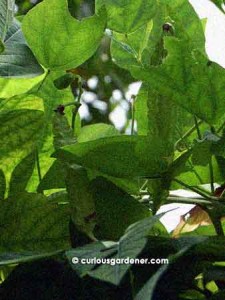 Winged beans aren't easy to spot. Can you see the two in this picture?

I’ve been frustratedly waiting for the winged bean vines to produce more beans for weeks now. It buds and flowers fairly regularly, and we harvested the first three beans last month.

There was another bean that was high up and out of reach that we missed, and it grew big and tough. I managed to pluck it two weeks ago and broke it apart to see what fresh beans looked like – they’re a very light, pale green. I thought they were too green to plant, but because I am who I am, I stuck them into the edge of one of my potted plants and waited. They germinated in less than a week! So I will try to grow the vine elsewhere in the garden and see what happens.

This brings me back to my original question – where the heck are the beans if my current plants are flowering?? 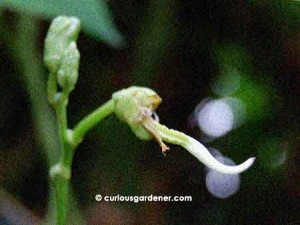 The forming four-angled bean after the flower petals have dropped. Doesn't it look like some kind of worm or caterpillar?

Looking at the beans as they develop, I noticed that the bottom half looks like a little white tail. Could birds mistake that “tail” for a worm or something edible?

In fact, the entire mini-winged bean looks like a caterpillar.

Could the birds be responsible for the missing beans? I suspect they are. The trellis that the vines grow on is a favourite perch for all kinds of birds. In fact, that entire area of the garden is a bird haven, for those birds that eat insects. The shade and humidity provided by the trellis, sweet potato patch and two mango trees encourages insects to meander out in the heat of the day, and hunting birds like the brown shrike and tailorbird are common visitors. Maybe – just maybe – they’re the ones “attacking” my winged beans. There have been a couple of beans that I was watching grow that mysteriously disappeared. 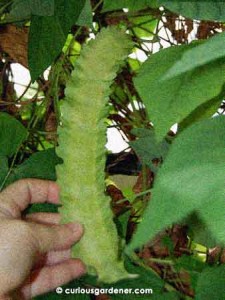 Huge but inedible, the old winged bean is hard and can possibly be used as a weapon...

Of course, having a too-high trellis is also part of my problem. After the days of rain that we’ve just had, I finally went to that overgrown, damp part of the garden and finally found a few more beans growing. Three of them are still young – and hopefully will not be mistaken as caterpillars – while two are huge and way too old to be harvested for eating.

Curious Mama wants to keep the old beans to get seeds. We’ll probably pluck one so I can show her the younger seeds while we let the other bean age more on the vine. And maybe even more beans will form in the meantime. I’m wondering if there’s a correspondence between the formation of the beans and the rainy weather, because if memory serves me correctly, the first three beans were also harvested after a rainy period.

I shall have to observe and take notes, since apparently my memory isn’t that great…