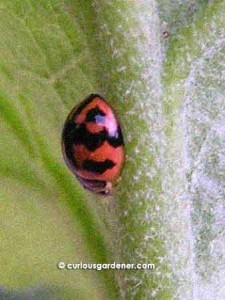 The migrant ladybug that stayed on the potted brinjal plant after it was moved to a new part of the garden.

A few months ago, I marveled at the sight of a ladybug feasting on black aphids on my winged bean vines. While it confirmed what I’d heard about having to have the pests before the beneficial insects came to feed on them, all I saw at that time was the one ladybug. I wanted more.

Then, a little more recently, I thought I recognized a ladybug nymph in what has become my plant nursery area. Unfortunately, I lost track of it and couldn’t confirm whether or not it eventually transformed into a ladybug – but I’d like to believe it did.

In the meantime, I know that at least one ladybug travelled with one of my potted brinjal plants that initially grew near the winged bean trellis. It was part of an experiment to see what growing conditions would suit aubergine plants best, so I placed the potted plants in different locations around the garden. Anyway, that ladybug stayed with the plant most of the time. It wasn’t always there, though. 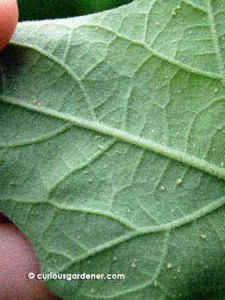 The start of the yellow aphid infestation - it got worse in a matter of weeks.

And then, a few weeks ago, I was irritated to see that yellow aphids were starting to spread on that plant. When I flipped the leaves over, the undersides were liberally speckled with tiny and not so tiny yellow aphids that increased in number with each day. I initially squished them, but eventually gave up because it didn’t seem to be doing any good.

Besides that, I also noticed little black dots that may not have been aphids. I recalled that other creatures that prey on aphids lay their eggs amidst the infestation so that when their young hatch, the food will be right there. So, I left the yellow aphids alone and let nature take its course.

Fast forward to this week where I’m making my usual rounds, visiting my plants to see how they’re faring, and then I notice something new on this brinjal plant’s leaves… 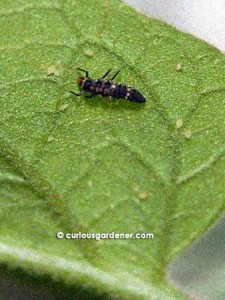 A very well fed ladybug nymph amidst yellow aphids beneath an eggplant leaf.

It looked like what I had originally suspected to be a ladybug nymph, and it seemed to be very happy roaming among the depleted number of yellow aphids under a leaf! I was so excited that it took a while to realize there were more of these longish black insects on other leaves all over the plant! That sealed the deal for me and I am declaring them ladybug nymphs for sure! 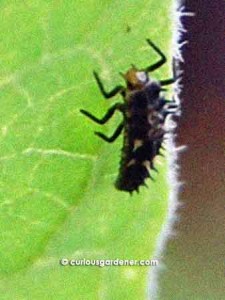 A closer look at the alien-like ladybug nymph

They really don’t look anything like adult ladybugs. Their bodies are long and oddly ridged like crocodile skin. Okay, maybe the heads look a bit beetle-like and they have six legs. But that’s it. You’d never guess that these creatures will eventually transform into cute, round beetles.

Well, these babies look happy and well-fed, and I’m very happy to have been able to provide them food, and hopefully a place to call home. So I’m now even more sold on the concept that letting pests establish themselves will bring in the pest-eating cavalry. Yee-haw! 8)