Certain foliage plants tend to catch my eye – usually caladiums and alocasias with interesting shapes, colours and patterns. Goodness knows I’ve bought and collected several of them without knowing their identities. I still don’t know the names of all of them, but I like them very much.

One thing I’ve learned about these plants is that, like my culinary ginger plants, they go into hibernation for several weeks before regenerating themselves. If not for that bit of knowledge, I could have considered the plants as goners and tossed the soil or planted something else in the pot, as I’ve done in the past. However, with that little sliver of hope, I kept watering the soil lightly on hot, dry days – thinking what a fool I was to hope – but was finally rewarded when new growing spikes appeared. Here’s the tale of two plants… 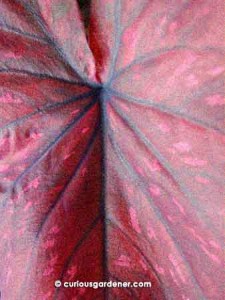 The gorgeous patterns on the Ma Had Thai caladium leaf. You can't get more Christmassy than that!

I didn’t know the identity of this plant when I first got it, but since it grows from a corm, I assumed it’s from the caladium family. I picked it up last Christmas because the deep red leaves and dark stems added to the yuletide feeling. I re-potted it when I first got it, then watched in alarm as, one by one, the leaves died off until, like the Highlander, there was only one. It, too, died, and I kicked myself for traumatizing the plant. However, it began to grow again, but the leaves were different – probably because of the new potting mix and maybe the shape of the pot, which was shallower and wider than the original. These new leaves were rounder, broader and a bit more vibrant in colour, and the leaf stalks were shorter. I was so pleased! But after a few months, it died off, and I kept my fingers crossed it would “wake up” again – which it has! After some online searching, I’ve finally gleaned its identity – the Caladium Ma Had Thai, or ‘Hot Lips’. I think I’ll stick to calling it Ma Had Thai. 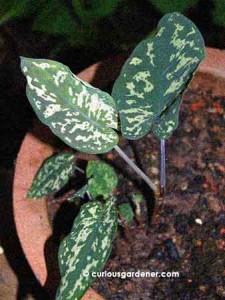 The regenerated Hilo Beauty plant with soooo many new leaves. We are pleased!

The next plant was also an impulse buy. I liked the camouflage green pattern of the leaves. I’ve seen this identified online as an Alocasia ‘Hilo Beauty’. It’s an extremely slow grower, and has put out a maximum of just 3 leaves at a time. So when it began to die out, we looked on in dismay, because mum and I really liked it. We had experimented with a couple of different soil mixes, fertilizers and locations, but couldn’t get it to do any better. This was actually our second pot of this plant. However, I once again kept my hopes up and kept the soil reasonably moist, and was thrilled to see it start growing again after about 2 months. What made me extra happy was that there were three growing spikes instead of one! Alocasias grow from rhizomes, so I guess (short of digging up the plant to see) that the rhizome must have been growing bigger, which is why it has now sprouted more heads – that have now sprouted more leaves each. 8)

I just think it’s so interesting that plants have a time for growing and a time for resting, and I’m so grateful that these babies didn’t die out. It gives me more confidence to go and acquire some of the other plants that didn’t survive in the past!