Every so often, our dogs get all worked up out in the garden, in full hunting mode. When that happens, I know there will be some kind of “surprise” waiting to be found – dead rodents, birds, etc. Sometimes, I interrupt their hunt – especially if they’ve chased a cat up a tree, or if they’re on the trail of something unusual like the plantain squirrel that visited last year. A couple of nights ago, I had a nasty shock when I switched on the garden light to see what they were nipping at in the dark, and saw a long reptilian body undulating on the ground! 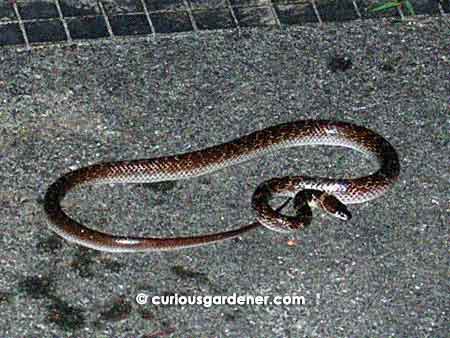 No apologies for the bad camera angle, because I wasn't going any closer to the snake than I had to!

If you think about it, the whole of Singapore used to be one big tropical jungle until we began to tame it over the last century or so. So, it’s natural that wild creatures like snakes be around. I sometimes come across blind snakes when I’m working in the garden. They tend to hide beneath stones and bricks, where it’s cool and moist. Most importantly, they’re usually small – maybe a handspan long at most – but they still have that sinuous way of moving that chills my blood. The snake that my dogs were interested in, though, was substantially longer. It was coiled up and I didn’t want to get close, but I’d guesstimate it at about 40cm long.

We got it identified through a friend as the Common Wolf Snake (Lycodon capucinus), also known as the house snake. I’m not comforted at all knowing that they eat geckos, because we have many house lizards and I certainly don’t want a snake indoors! I still remember the chaos that would erupt when that happened in my childhood – and back then when the neighbourhood was more kampung than built up, snakes such as pythons and cobras crossed paths with us occasionally.

My friend, who is as comfortable wading through Singapore’s swampy marshlands as I am in my garden, called the snake “harmless”. If you say so, Mr Otterman – but I prefer to keep my distance, thank you very much…

I did the humane thing in letting the snake go on its way, but was quick to scatter sulphur flakes around the perimeter of the house. According to the guy at the plant nursery, snakes dislike sulphur, so I hope it goes far, far away from the house. I bought the sulphur over a year ago when we spotted another, unknown, snake and I hope the flakes are still potent!

It’s a small consolation that this snake is non-venomous and shouldn’t be a danger to my dogs, but from what I’ve read, it will defend itself fiercely when attacked and has sharp fangs that it is not shy to use. Thankfully, the dogs seemed unharmed. I did learn that the snake is nocturnal, so that makes hand-pollinating my evening-blooming loofah plants a little tricky. No more moonlit strolls for me! However, now I find myself eyeing the more “wild” areas of the garden and wanting to civilize them – particularly the sweet potato patch. How am I ever going to be able to tell what’s lurking under all that low foliage?