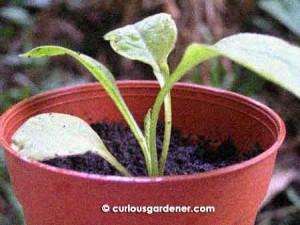 The comfrey when I first got it - in a 7cm pot.

When I read about how comfrey can be used in gardening, I wanted to get it. The only problem was, it’s not native to Singapore – so I gave up that idea until my “plant fairy godmother” who likes to grow the cute and unusual gifted me with a young comfrey plant.

I have this weird idea that plants grown from seed in the environment they’re going to grow in will be more hardy than an already growing plant. What if my micro-climate is so different from what it’s used to that it won’t survive?

Godma Sky recommended I place the newly potted comfrey plant in a closed plastic bag so that it would be in constant humidity. As the weather at that time was hot and dry, I did that, and left the plant in its terrarium for quite some time (which was quite cool, because I didn’t have to bother about watering it!). It grew new leaves but began to lighten in colour as I didn’t want to give it too much sun. 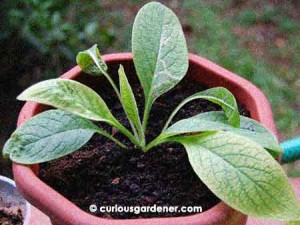 The comfrey in its new home - a 15cm pot this time.

Yes, I was really nervous about keeping it alive!

However, the plant kept growing, and when the weather became more rainy, I decided to risk taking it out of the protective “bubble” and let it acclimatize to its new home – finally. When the rainy weather broke, I worried again that the plant would dry out, so I fitted the pot into the top of a plastic cup that I filled with water, creating a self-watering pot! It survived, but the roots eventually grew out and into the water reservoir below. So, I’ve transplanted it one more time to a bigger, deeper pot. It’s also in a new location with morning and afternoon sunlight as I think it needs to photosynthesize more. Leaf miners have also “visited”, hence the squiggly white lines on the leaves.

So, Godma Sky, the comfrey is still alive. I hope it will grow as well as your plant!