When I started this blog, I wondered if I’d be able to keep finding new things to write about. Well, thanks to my plants and the many creatures that walk, crawl and fly, the answer is obviously yes!

Take for example my next round of long beans. I had planted one seed each in a recycled plastic cup, and early this morning was gratified to see three curved stems breaking through the soil. I knew by evening, they would have their heads held high, with the seed leaves peeping from between the halves of the bean. That’s what normally happens.

Well, today was not normal. When watering my plants around midday, I found this: 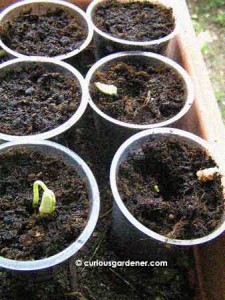 Bottom left is what I expected to see - the emerging bean sprout. Bottom right, and just above that one, are empty holes where the sprouting beans were. What happened?

There were supposed to be three emerging sprouts, as per the cup in the bottom left. Instead, there was only one sprout, with the other two cups in question with only the beans left on the surface of the soil – and empty holes where the sprouts once were!

I looked again and found that, oh, there was part of a stem – broken – in one of the holes as well. Some bird poop in an adjacent pot gave me a clue… My guess is that a bird saw the curve of the stems breaking through the soil and thought they were something they could eat – like a worm or some garden grub! It must have happily yanked them out and been sadly disappointed, leaving the seed heads behind in disgust. But then, I couldn’t find the rest of the roots and stems… It’s an interesting hypothesis, anyway! 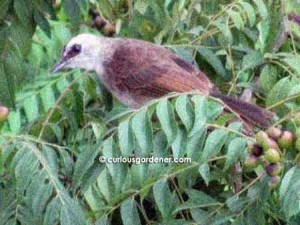 My first choice: the yellow-vented bulbul - there are a couple of families of them in the neighbourhood and they're rather active food seekers. 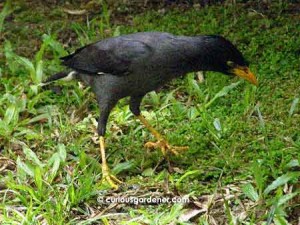 My second guess: the cheeky mynah. They're always poking around and looking for things to eat.

Well, you can’t say that things are only about plants when you garden, can you?

My consolation is that beans grow quite easily, so I can replace the two that died an untimely death.