When I started growing edibles just over a year ago, I was content to germinate the seeds and watch the plants grow out in the garden. I even remembered to fertilize the plants with various fertilizers such as bonemeal, fish emulsion, etc. To me, that was considered doing a good job … until someone began to talk to me about high brix and how it helps plants. It made my head hurt thinking about it, and I put off learning more about it in favour of enjoying watching my plants grow. 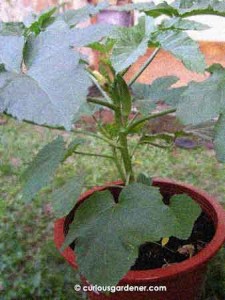 Okra plant growing in mix of black peat and white peat - an acidic soil pH that it apparently loves. Just look at the size of those leaves! Then compare them to the "normal" leaves at mid level that grew before the transplant to the new soil mix.

Since then, I’ve gained experience about my edible plants and have become more open to finding out how else I can help them. I still haven’t reached the brix level (LOL) but I’ve become intrigued about different potting mixes. One in particular kept popping up on the GCS Forum – Tref, which is the brand name for a mix of black and white peats. In appearance and texture, it resembled the product commonly marketed as a pre-mixed plant potting mix, except it lacked the white vermiculite pellets. I used the Tref initially as part of a potting mix, experimenting with different percentages of garden soil to see what suited what plant.

One day, however, I finally decided to use 100% Tref for a potted okra plant. I had initially grown the juvenile plant in normal soil and decided I would experiment growing it in Tref. About a week after the transplant, the okra plant underwent an amazing growth spurt. The stems seemed suddenly thicker and stronger, and the new leaves that grew were so much bigger than any okra plant I’ve ever grown, including those planted out in the garden and fertilized regularly!

Ever the slowpoke, I looked up the correct soil pH for okra and found it to be between 6 to 8. The pH of Tref is apparently around 5 to 6 – acidic on the pH scale.

Next, I checked the manufacturer’s specifications for my compost, and found that the pH value is “not more than” 8. So, I created a small plot where I mixed in about 30% compost to the garden soil, then added an additional layer of the compost to act as mulch. Into this plot went my other juvenile okra plant that had sprouted later than the first. Over the following weeks, I’ll be observing the two plants to see how each grows in its respective environment. However, I’m already swung to the idea that yes, soil pH matters, and that fertilizer isn’t necessarily the only factor that helps plants.