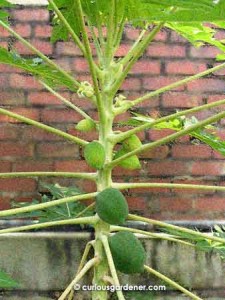 Finally, the tree is in full fruiting momentum! The number of developing papayas keeps growing by the week...

It’s quite astounding to look at the Red Lady papaya trees and see how they’ve each grown at such different rates although they were all planted at the same time, 11 months ago.

The “firstborn” was not the fastest to grow, but it ended up being the first to bear fruits. Looking at the tree now, with several fruits at various stages of development, as well as flowers that promise more fruits in the near future, I wonder why I was such an anxious “parent”. It should be a matter of weeks before we finally harvest the first fruit, and if the seed supplier is right, we should get the equivalent of a daily supply of papayas for a month. That’s my convoluted way of saying about 30 fruits from a single tree.

The tree that initially showed the most promise was unfortunately over-run by mealybugs, and I made the heartbreaking decision to remove the tree when the pests proved too difficult to get rid of. Comparing the flowers on that tree to the ones we have now, I think it would have been another hermaphrodite.

Thankfully, I planted several seeds, and now have another hermaphrodite tree that has begun fruiting as well. Unlike the “firstborn”, it didn’t abort a lot of flowers before the fruits appeared. I can’t say for sure, but perhaps the compost that I’d laid beneath the tree had something to do with that. As I’ve mentioned before, I suspect that the soil in our garden needed a replenishment of nutrients, which is why I got that big order of compost last month. Since I couldn’t till it into the earth around existing plants without damaging their roots, I used it as a layer of mulch under the treeline. I trust it’s doing good things to the soil composition beneath. 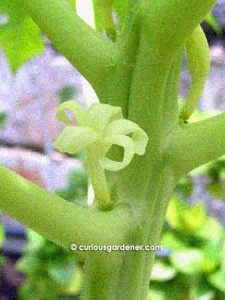 One tree appears to be male, judging by the long, narrow flowers that don’t have any nice, fattening ovaries. It’s just an educated guess on my part. I’m keeping it for now, in case any of the other developing trees turn out to be female.

At one point, I also experimented with transplanting a couple of the plants. I’d read that papaya trees don’t like being moved – and of course, since I had several young plants then, I had to experiment! Well, it was more because I didn’t want to cull any trees prematurely. You see, I had planted seeds in pairs, working on the principle of keeping the stronger of the two plants and removing the other. Rather than toss out a healthy looking plant, I transplanted two of the “extra” plants. I can’t say that I have conclusive results, because one is growing very well – and is in fact the second hermaphrodite tree that is beginning to fruit now – and the other is not looking very robust and is going to disappear soon.

Overall, though, the Red Lady papaya trees have a nice big check mark in my books! As tropical plants, they grow well here. They don’t need coddling apart from at least twice weekly visual checks for mealy bugs. When I see those now, I remove them by hand and later spray a couple of puffs of white oil on a few of the leaves, with the idea that the scent will deter more pests for a while. Since papaya trees don’t like being over-watered, I also don’t have to water them because it rains from time to time, and I know that papaya roots are deep and invasive, so will get moisture from deeper underground. And now that I’ve added the compost mulch under the trees, I also don’t worry about fertilizing the trees, either. My next worry will be protecting ripening fruits from birds, but that should be a few weeks away.

Until then, the Red Lady papaya saga continues!